‘Together we will defeat RSS ideology’ 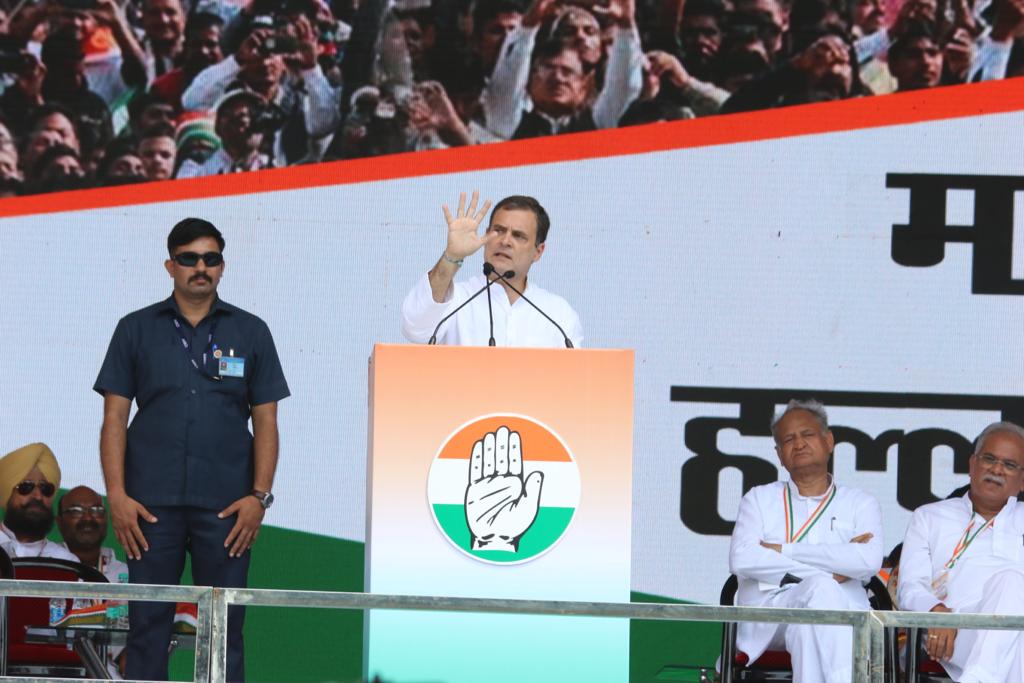 Congress leader Rahul Gandhi on Sunday cornered the Narendra Modi government over price rise issues while accusing it of spreading fear and hatred among the general public. He also took on the media for failing to raise people’s issues.

Addressing the ‘Mehengai par Halla Bol’ rally in the national capital, Gandhi resolved to “defeat the ideology of BJP and RSS” by taking along all the opposition parties. He added that anger and hatred among the people increased ever since the BJP came to power at the Centre. Gandhi said “Modi is still the Prime Minister thanks to the media and two businessmen.”

He strongly pitched the achievement made by the UPA government saying that the Manmohan Singh government gave impetus to the economy and brought 27 crore people out of poverty. “In last 8 years, Modi has pushed 23 crore people back to poverty. Modi talks about New India, Make in India but Modi is taking India backward, spreading hatred and fear. This will benefit our enemies, China and Pakistan.” He added that the PM criticized MGNREGA, but it significantly helped people during the coronavirus pandemic. “It is because of our MGNREGA that millions of people could get jobs during the Covid,” Gandhi said.

Gandhi also attempted to explain the reason behind the Bharat Jodo Yatra move started by the party recently. He said: “The government has closed roads to Parliament. When we try to speak in the House, our mikes are turned off. So, we have to go to the people.”

Gandhi meticulously picked up issues to target the PM and attacked the media for failing the people by ignoring their pressing issues of the general public. He said that the opposition parties rarely were given due space in the media.

Chhattisgarh chief minister Bhupesh Baghel claimed that the BJP in power is not fighting against price rise but only fighting against Rahul Gandhi. “Now, there is a debate on ‘revdi’ (freebies). When the Congress fights for poor people, they call it ‘revdi’. When Modi gives to chosen people, it is ‘rabdi’ (a popular Indian sweet), not revdi,” he said.

Congress leader Shashi Tharoor, who is contemplating running for the party president, hailed Rahul Gandhi’s saying he made a “strong speech”. He tweeted: “A strong speech by Rahul Gandhi at Congress Mehengai Par Halla Bol rally’ roused the huge crowds thronging the Ramalila Maidan. Now to take the message across the country in the Bharat Jodo Yatra.”

Among the general public, Gandhi’s call for taking all opposition together to defeat the BJP seemed to have struck a chord. The call for overthrowing BJP started after the Bihar CM Nitish Kumar snapped ties with the saffron party and gave a call for defeating Modi in the 2024 general elections.

“Modi is big or undefeatable for people like you (media). With change of scenario in Bihar, the BJP’s defeat in 2024 is almost certain…There will be surprising results in West Bengal and Bihar,” said Yaser Shahid, President of Professional Congress in Bihar who arrived from the state to attend the rally. He said, “Hollow words, empty promises have come to symbolize Modi. Even his supporters know Modi failed on every front. But unfortunately most TV news studios are filled with his bhakts,” he said. He added: “There is a trend to target opposition… By evening, you will see agenda-driven political experts and anchors questioning Congress leaders on every issue other than inflation and unemployment.”

As reports emerged that Congress workers were detained during a march to protest the rise in prices of essential commodities, Delhi police denied it and said no Congress worker has been detained so far.

Earlier in the day, former Minister Jairam Ramesh told news agency ANI that the rally has nothing to do with the elections and is a befitting message to the insensitive central govt as the people of the country remain troubled by inflation and unemployment.

Meanwhile, Delhi police said that adequate security arrangements have been made in and around the Ramlila Maidan in central Delhi in view of the Congress’ protest. The Delhi Police has also issued a traffic advisory on its official Twitter handle, alerting the commuters about road closures on Sunday. Party workers from Delhi, Haryana and Uttar Pradesh, besides other parts of the country, will participate in the rally.

BJP was as usual quick to hit back at the Congress with most of its spokespersons targeted the Gandhi family saying that the rally was organized to “re-launch Rahul Gandhi” and “protect family”. Sambit Patra termed Congress’ ‘Halla Bol’ rally as Parivar Bachao rally. “If I tell you truly it was a Parivar Bachao rally to save themselves,” he said.

Addressing a press conference at the BJP headquarters in the national capital, its national spokesperson Rajyavardhan Singh Rathore said the real purpose of Congress rally is to save Gandhi family and relaunch the family scion Rahul Gandhi. “This rally is meant to save the family and not to protest against price rise. And to relaunch Rahul Gandhi, who has been launched several times in politics. This rally is ‘Rahul Gandhi relaunch 4.0’, as no one wants to lead the Congress,” Rathore said, according to DNA.