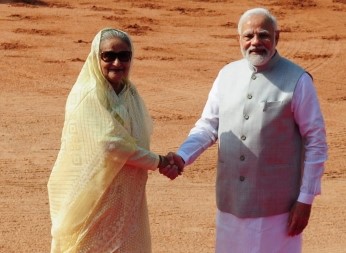 New Delhi: Bangladesh Prime Minister Sheikh Hasina, who was a regular visitor to the Dargah of Hazrat Nizamuddin during her forcible exile in India from 1975 to 1981 following the massacre of her father, Bangabandhu Sheikh Mujibur Rehman and almost her entire family, began her India visit on Monday with a visit to the historic Sufi shrine.

Ahead of her visit, the shrine’s Sayyid Basit Nizami said” If she is coming, then she is coming with a wish. I will pray for her like my father and grandfather did. I hope that she will leave here contented.”

Sheikh Hasina had visited the Dargah in 1997, but this visit was her first as Prime Minister.

The Bangladesh Prime Minister is on a four-day India visit from Monday during which she will hold talks with her Indian counterpart Narendra Modi, with the issues of connectivity and river water-sharing taking key focus. During her stay, she will also visit the Ajmer Dargah, which she had last visited in 2017 after her fist visit in 2010 when she became Prime Minister for the second time.

Upon her arrival on Monday, she visited the dargah of Hazrat Nizamuddin. External Affairs Minister S. Jaishankar and businessman Gautam Adani called on her later in the day.

Prime Minister Hasina, who is on a four-day visit to India, is also set to meet President Droupadi Murmu and Vice-President Jagdeep Dhankhar.