Pele: The King may have died, but his legend will live forever 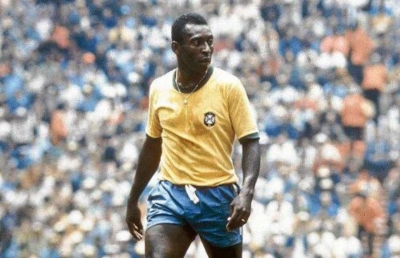 Mumbai :Football’s original G.O.A.T., the man who made football ‘the beautiful game’, global sporting hero and Brazil’s former sports minister, Edson Arantes do Nascimento, who, as ‘Pele’, overawed the world and became the sport’s original legend, passed away on Thursday night in Sao Paulo, Brazil, losing his battle against cancer, at the age of 82.

Called by various names such as ‘Gasolina’, ‘The Black Pearl’ and ‘O Rei’ (The King), but it was as ‘Pele’ that he has left the world as the most cherished and loved sports star it has ever seen.

Pele, 82, passed away in a private hospital in Sao Paulo, Brazil, after spending nearly a month, battling complications related to advanced cancer.

He had a colon tumour removed in September 2021 and neither his family, nor doctors, specified whether it had spread to other organs. He was recently under “elevated care” related to :kidney and cardiac dysfunction”.

But for millions of fans of the game around the globe, Pele was the first person who made football ‘Jogo Bonito’, “the beautiful game”.

He was the original No. 10 of world football, a number now sported by Lionel Messi and Kylian Mbapp. He was the genius who played the game with passion and was so unstoppable that fouling him was the only option for the numerous defenders that he faced.

A player of sublime skills, great presence in the field, immaculate positional sense, magical dribbling skills, two brilliant feet and a devastatingly powerful shot, right-footed Pele was thus far the only footballer to have lifted the World Cup thrice — 1958, 1962 and 1970.

In his nearly-two-decade-long career, Pele scored 1,279 goals in 1,363 games, which included friendlies. This is recognised as a Guinness World Record. He is also the youngest-ever scorer for Brazil — and holds the record still — and at 17 was the youngest to play in a World Cup final.

Born as Edson Arantes do Nascimento on October 23, 1940, in a small provincial town in Minas Gerais, Brazil, Pele’s aura grew even stronger after his retirement as he travelled all over the world as ‘The King’ and was hosted by royalty, heads of government and billionaires.

He was declared the Natural Treasure by Brazil’s federal government in the 1960s to prevent him from being taken to Europe to ply his trade there. On one occasion, he got a civil war stopped as the two warring factions in Nigeria announced a ceasefire to coincide with Pele’s visit to their region.

Born in poverty to Fluminense footballer Dondinho (born Joao Ramos do Nascimento) and Celeste Arantes, Pele made his debut for Santos, the only club he represented in an official league, at the age of 16 in 1956. He played for Santos from 1956 till 1974, scoring 648 goals in 659 appearances.

Pele enhanced Santos’s recognition around the world, touring various countries with the team and drawing huge crowds. From 1975 to 1977, Pele played for the New York Cosmos, making the American club a household name. Pele played 56 matches for Cosmos in three years, scoring 31 goals.

‘The King’ made his first impact on the international stage at the 1958 World Cup as a 17-year-old, scoring some impressive goals, including two in the 5-2 win against Sweden in the final as he helped Brazil win their first World Cup. At the international level, he scored 77 goals in 92 matches.

He has won dozens of awards and set a string of records in world football — he was, for instance, the youngest player to play in the World Cup and lift it (he was aged 17 years 244 days) and also the youngest player to score a hat-trick in the FIFA World Cup, besides winning honours beyond the football field — he was given an honorary knighthood by Queen Elizabeth II in 1997.

He was the UNESCO Goodwill Ambassador since 1994. In 1995, Brazilian President Fernando Henrique Cardoso appointed Pele to the position of Extraordinary Minister for Sport, a position he utilised to propose legislation for reducing corruption in Brazilian football, which is now known as the Pele Law.

A multi-faceted personality, Pele published many books, including his autobiographies, and even starred in movies — the most famous of them being the Hollywood flick, ‘Escape to Victory’, which had Sylvester Stallone and Michael Caine in the lead roles. He also acted in Brazilian movies, television serials and documentaries.

But more than all these achievements and aspects of his life, Pele always had a place in and ruled the hearts of his million of fans around the globe like The King he was. He was non-controversial and a genius who lacked the flawed personality of someone like a Maradona or a George Best.

There were some controversies related to his businesses, notably allegations of misappropriation of funds related to Unicef, but nothing was ever proved. Pele participated in many humanitarian projects after retiring as a footballer, which only enhanced his reputation.

It is this universal appeal as a humble, loveable and well-respected human being that resulted in many football players, including France’s World Cup hero Kylian Mbappe, sending him their wishes as Pele fought for his life in a hospital in Sao Paulo.

The King may have died, but his memories will be alive forever!
IANS

King Pele: A glorious life of setting and breaking records