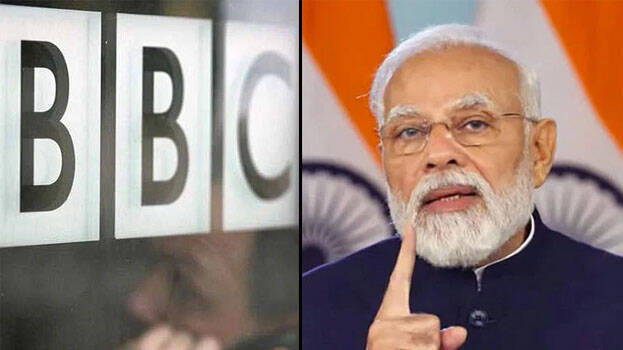 Opposition parties and eminent personalities have slammed the Union government for blocking BBC documentary, which examined the role of Narendra Modi during Gujarat communal riots in 2002, with many calling the move as “censorship.”

The Ministry of Information and Broadcasting (I&B) on Saturday blocked multiple YouTube videos sharing the first episode of the BBC documentary “India: The Modi Question” have been blocked. Modi was chief minister when communal riots engulfed the state in which more than 2000 people were murdered and properties worth crores of rupees were destroyed.

The BBC defended its series. “The documentary was rigorously researched according to the highest editorial standards,” a BBC spokesperson said in a statement.

The Communist Party of India (Marxist) said that the government argument to ban the documentary is not correct. CPI-M leader Thomas Issac indicated that the BBC documentary was not a “one-sided”. Issac said that former BJP’s Rajya Sbaha MP Swapan Dasgupta has been given ample room to place the side of the saffron party.

Congress spokesperson Jairam Ramesh alleged that the move was nothing but “censorship”. He wrote on Twitter: “PM and his drumbeaters assert that the new BBC documentary on him is slanderous. Censorship has been imposed. Then why did PM Vajpayee want his exit in 2002, only to be pressurised not to insist by the threat of resignation by Advani? Why did Vajpayee remind him of his rajdharma (sic)?”

Similarly, Congress leader Gaurav Vallabh took a dig at the Modi government, saying that there is a new trend emerging in India, which is “Block in India”. He said: “There is a scheme of the government of India called ‘Block in India’, like ‘Make in India’, ‘Startup India’. The government does not want difficult questions to be asked. If the BBC headquarters were in Delhi, the ED (Enforcement Directorate) might have been on their doorstep by now.”

Noted lawyer and activist Prashant Bhushan, whose tweet on the documentary was also blocked, according to The Wire, said that the alacrity with which the Modi government decided to block the BBC documentary in India only shows that it has “much to hide”.

Ram, former editor-in-chief and publisher of The Hindu, said is “not only tantamount to unacceptable censorship but going over the top”. In an interview to The Wire with Karan Thapar, he said the documentary has “followed every rule in the book”. He pointed out that the BBC documentary gave “the government a right of response” but the government declined to take it up. Ram called the BBC documentary “a very good piece of investigative journalism”.

All India Majlis-e-Ittehadul Muslimeen chief Asaduddin Owaisi said a movie on Nathuram Godse continues to have a free run, but films like the BBC documentary, which questions the horrific incidents of communal violence, has been banned.

Trinamool Congress MP Mahua Moitra strongly dissented against the government’s move, alleging that the Modi government is “insecure”, reported The Wire. Before posting the list of all the 50 tweets that the Union government asked Twitter to withhold, she wrote, “Shame that the emperor & courtiers of the world’s largest democracy are so insecure (sic).” “Sorry, Haven’t been elected to represent the world’s largest democracy to accept censorship. Here’s the link. Watch it while you can,” her second tweet in which she re-posted the link to the documentary said.

TMC MP Derek O’ Brien said that the blockade was “censorship” of free voices. “Censorship… @Twitter@TwitterIndia has taken down my tweet of the #BBCDocumentary, it received lakhs of views. The 1 hr@BBC docu exposes how PM @narendramodi hates minorities,” he tweeted.

Shiv Sena leader Priyanka Chaturvedi questioned the government’s increasing propensity to ban in a digital age, according to the gusty news portal. She tweeted: “In the age of VPN, how impactful are these bans under emergency clauses cited by the I&B Ministry to ban a BBC documentary. The more they pour scorn on it, write protest letters, the more people would be curious to watch.”

The government, however, remained undeterred. One of the key arguments of the government is that the Indian Supreme Court and several probe agencies did not find Modi guilty, so the matter should be put to rest.

Union law minister Kiren Rijiju tweeted saying “Some people in India still haven’t gotten over the colonial intoxication”. “They consider BBC above the Supreme Court of India and lower the country’s dignity and image to any extent to please their moral masters,” read a rough translation of his Hindi tweet.

“Minorities, or for that matter every community in India is moving ahead positively. India’s image cannot be disgraced by malicious campaigns launched inside or outside India,” he said in a tweet.

‘No bigger issue than restoration of J&K’s statehood’