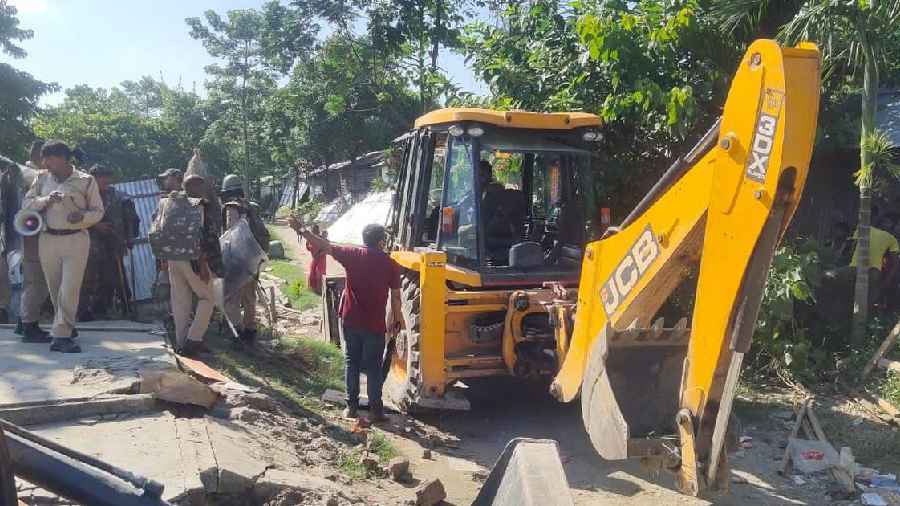 There is no letup in eviction drive across Assam ever since the Himanta Biswa Sarma-led government took power in the state. In a fresh action against the “alleged encroachers” in Lakhimpur district, more than 500 families were driven out from their habitations in the name of clearing forest land.

Opposition leaders and critics have repeatedly urged the state government to halt the “oppression”, but the Chief Minister so far remained unrelenting in giving any reprieve to the poor in the chilling cold. Sarma on December 21 had told the Assembly that eviction drives to clear government and forest lands in Assam would continue as long as the BJP is in power.

On Wednesday, the local authorities evicted “encroachers” from a forest land in the region, with 299 families residing on a 250 hectare tract left in the lurch. The drive that began on Tuesday was being undertaken to free up around 450 hectares in Pava Reserve Forest.

Lakhimpur Divisional Forest Officer (DFO) Ashok Kumar Dev Choudhury noted that out of the 46 sq km Pava Reserve Forest, only 0.32 sq kms were free and the rest all occupied. Altogether 701 families have encroached upon the Pava Reserve Forest land over the last three decades, he said.

“The eviction drive resumed today at 7.30 am. It has been peaceful so far. We have not faced any resistance,” a senior official of the district administration told PTI. The administration has plans to clear the remaining 250 acres during the daylong exercise on Wednesday.

“If a person comes to the forest, he will not find any sign of it. It has been transformed into a village, where people are engaged in farming. Once known for wild buffaloes, all animals have vanished from Pava due to this encroachment over the past three decades,” Choudhury added.

Around 70 bulldozers, excavators and tractors are pressed into action in Adhasona village, alongwith 600 police, CRPF personnel and 200 civil officials guarding the eviction as the ‘illegal encroachers’ stand witness to the demolitions of their homes, reported Outlook. With some belongings in tow, Hasmat Alam (name changed on request), claimed that he had been a resident of that area for the past 28 years, wrote the news Outlook. “This year, the harvest was good. I grew brinjal, cabbage and cauliflower and sold some of the produce in the market. Around 70 per cent of the crop, however, got destroyed in the drive,” he said.

The authorities boastfully claimed on Tuesday to have cleared 200 hectares land of ‘encroachers’ on the first day in Mohghuli village, which was home to 201 families.

The disposed citizens claimed that they hardly picked their belonging when the bulldozers stuck their localities, demolishing whatever they built brick by brick over the years. Some of the evictees lamented that their crops were destroyed in the drive.

Jalebi Baba: The godman who drugged, raped over 100 women