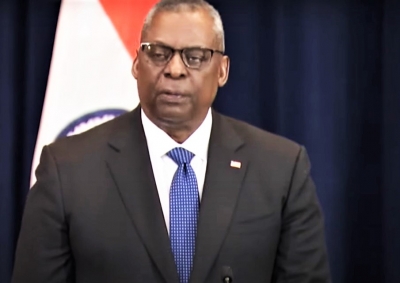 New York: India and the US have agreed to launch defence supply chain cooperation to quickly meet each other’s priority needs, according to Defence Secretary Lloyd Austin.

Unveiling several defence initiatives between India and the US at a news conference after the 2+2 meeting on Monday, he said, “Today we agreed to launch new supply chain cooperation measures that will let us more swiftly support each other’s priority defence requirements.”

“India continues to acquire key US defence platforms, and that is forging important and new ties between our defence industrial bases,” he said.

“Our defence trade and technology cooperation continues to grow. We recently concluded an agreement to work together on air-launched unmanned aerial vehicles through our Defense Technology and Trade Initiative,” Austin said.

“We’re doing all this because the United States supports India as a defence industry leader in the Indo-Pacific and a net provider of security in the region,” he said.

Defence Minister Rajnath Singh said that he has talked to US companies to make India a leader in aerospace manufacturing and has been discussing co-development and co-production.

He met on Sunday with representatives of Boeing and Raytheon.

Austin and Singh met for the 2+2 meeting in Washington with Secretary of State Antony Blinken and External Affairs Minister S. Jaishankar.

Laying out the rationale for defence cooperation, Austin said, “As strategic threats converge, especially following Russia’s invasion of Ukraine, it is more important than ever that we stand together to defend our shared values and to preserve the international rules-based order.”

He also spoke of the threat from China which “is seeking to refashion the region and the international system more broadly in ways that serve its interests,” he said.

India and the US were deepening cooperation in cyberspace, “including through training and exercises later this year” and “expanding our information-sharing partnership across all warfighting domains,” he said.

The US and India have committed to more high-end exercises together, Austin said.

“We’re looking forward to more of this sort of cooperation as we expand the scope and the complexity of Tiger Triumph, which is our annual major tri-service exercise,” he added.

He also welcomed the Indian Navy to joining the Combined Maritime Forces, Bahrain, a US-led group of over 30 countries that works on counter-narcotics, counter-smuggling and suppressing piracy.IANS