COP27: History for vulnerable nations as deal to establish loss and damage fund 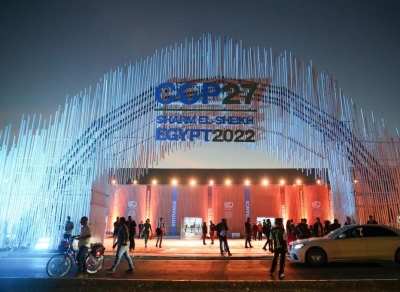 New Delhi: History was made for vulnerable countries and civic society who have been calling for funding for decades,  when diplomats from over 190 countries on Sunday struck a deal to set up a loss and damage fund to pay for climate-related damage, officials said, as the two-week-long United Nations climate talks (COP27) drew to a close on after two days of overrun.

Hailing the decision to establish a loss and damage fund and to operationalise it in the coming period, UN Secretary-General Antonio Guterres at the conclusion of COP27 in Sharm el-Sheikh in Egypt said: “From the beginning, this conference has been driven by two overriding themes: justice and ambition. Justice for those on the frontlines who did so little to cause the crisis — including the victims of the recent floods in Pakistan that inundated one-third of the country.”

The Alliance of Small Island States, a group of low-lying and island countries, had proposed a multilateral fund organized under the UN climate change convention which would be established over the next year.

Harjeet Singh, Head of Global Political Strategy, Climate Action Network International, told IANS in a phone interview that with the creation of a new Loss and Damage Fund, COP27 has sent a warning shot to polluters that they can no longer go scot-free with their climate destruction.

“From now on, they will have to pay up for the damages they cause and are accountable to the people who are facing supercharged storms, devastating floods and rising seas. Countries must now work together to ensure that the new fund can become fully operational and respond to the most vulnerable people and communities who are facing the brunt of climate crisis,” an elated Singh said.

For Joab Okanda, Christian Aid’s Pan African Policy Advisor, this is a victory for climate vulnerable countries and civil society who have been demanding this outcome for 30 years. For the first-time vulnerable communities have a fund dedicated to support them deal with the devastating loss and damage they have suffered.

“It has been a long fight for developing countries to get this fund, the devil will be in the detail and still need to see it filled with money, but it is a positive step forward towards climate justiceaIt’s disappointing that despite all the warm words from world leaders at the start of this summit about the seriousness of the climate emergency, countries couldn’t even commit to a phase down of all fossil fuels.”

Vaibhav Chaturvedi, Fellow, Council on Energy Environment and Water, said the only solace that the latest text offers to developing countries is a semblance of institutional structure for the Santiago network.

“This consists of a secretariat, an advisory board, and a network of members. This is too little and too late in the process. There is no funding in sight for loss and damage. Developed world has used its usual tactics to delay and divert the discussion on finance for mitigation, adaptation, and loss and damage.”

According to the Loss and Damage Collaboration (L&DC), a group of 100 plus practitioners, researchers, activists, and decision-makers from the global South and North, aCOP27 had a focus on Loss and Damage like never before.

Given the drumbeat of climate impacts coming into COP — one third of Pakistan flooded, devastating drought and famine in Kenya, heatwaves and drought across Europe and southern China, Hurricanes in Cuba and the US, glaciers disappearing and sea level rise and coastal erosion forcing Pacific Islanders to relocate.

“Developing countries were more aligned than ever before — in pre-meetings and throughout COP all 134 countries in the G77 and China spoke with one voice to demand climate justice. And civil society provided the flank with protests around the world and in the COP venue itself. And, finally, grudgingly, developed countries, with leadership from the European Union, agreed to establish a Loss and Damage fund,” said L&DC in a statement.

Disappointingly there was pushback against a definitive call to phase out all fossil fuels — blocked by Russia, Saudi Arabia and Iran.

“This issue is still live. While countries keep referring to 1.5C, they fail to take the necessary action to stay below this limit to prevent future harms from happening. As long as countries keep fueling the loss and damage crisis by expanding oil, gas and coal, real justice will not prevail.

“Importantly, the new Loss and Damage Fund needs to be filled, and the US and other developed countries did not agree to include loss and damage as a target within the new collective quantified goal for climate finance (NCQG), which will need to be corrected at future meetings,” it added.