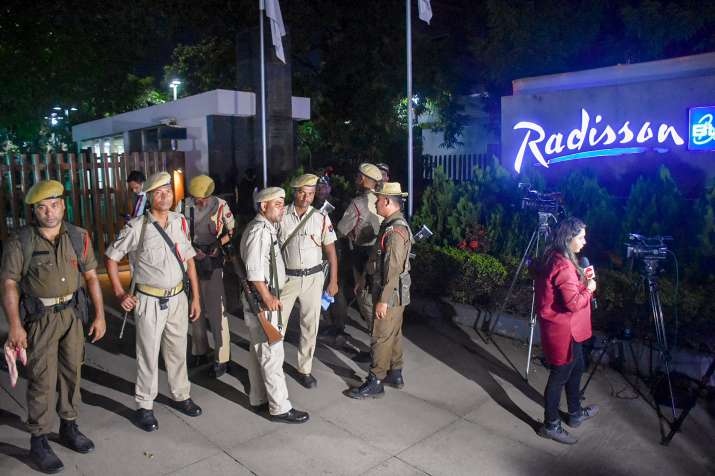 Guwahati, India News Stream: The luxurious Radisson Blu Hotel at the outskirts of Guwahati- the epicenter of Maharashtra politics has virtually been turned into fortress as many Shiv Sena leaders led by Eknath Shinde camped there, making moves to topple the Maharashtra Vikas Agadi (MVA)  government putting the existence of the Chief Minister Uddhav Thackeray under threat.

Entry of mediapersons into the hotel has been barred, where the Assam police have taken over the security from the hotel’s private guards.

After arriving in Guwahati via Surat on Wednesday morning, Shinde claimed that 40 MLAs have accompanied him to Assam who are devoted to late Balasaheb Thackeray’s ‘Hindutva’ ideology.

Shinde along with 32 Shiv Sena MLAs and seven other legislators, including Independents and those belonging to smaller parties, arrived in Guwahati on Wednesday morning and checked into the luxury hotel on the outskirts of Guwahati.

“Thirty-nine MLAs accompanied me. We are loyal to Balasaheb Thackeray’s ideology of ‘Hindutva’ and we are keen to take it forward,” the dissident Shiv Sena leader said, refusing to disclose details of their future course of action.

He, however, categorically said that they would not quit the party.

When asked by reporters why they came to BJP-ruled Assam, pat came Shinde’s reply: “It is a nice place.”

With the latest developments, the Shiv Sena-led government Maha Vikas Aghadi (MVA) government in Maharashtra seems to be stumbling on the brink of a possible collapse.

The Shiv Sena, which heads the MVA, has 55 MLAs, followed by allies Nationalist Congress Party (NCP) at 53 and Congress at 44 in the 288-member Maharashtra Assembly.

After landing at the Lokapriya Gopinath Bordoloi International Airport, the rebel MLAs were taken to the hotel on the outskirts of the city in three Assam State Transport Corporation luxury buses, escorted by the police.

With the deployment of a large security contingent led by senior officers, tight security has been put in place in and around the hotel.

This was the first time that rebel MLAs from outside the region have been brought to the northeast.

“The MLAs are known to us. They came here and we have received them as a matter of courtesy,” Borgohain told the media.

Meanwhile, talking to the media, Assam Chief Minister Himanta Biswa Sarma said: “40 people came to Assam. This is good. We are happy if more people come. We hardly have any tourists during this time.

“Some of our colleagues are there (with the Maharashtra MLAs). I will meet them if I find time today or tomorrow. Presently I am going to oversee the flood relief activities.”

The Congress on its part criticised the Assam Chief Minister for ‘conspiring’ to bring down the Uddhav Thackeray-led government in Maharashtra at a time when the people of Assam are in serious distress due to the devastating floods.

Assam Congress President Bhupen Kumar Borah alleged that some 40 MLAs of Maharashtra have been held to ransom in Guwahati.

“Sarma is involved in a shameful act,” the Congress leader said.

“The Chief Minister should concentrate on his own job and provide adequate relief to the flood-hit people of Assam. He can do his politicking later, not when people are crying for government support,” Borah tweeted.