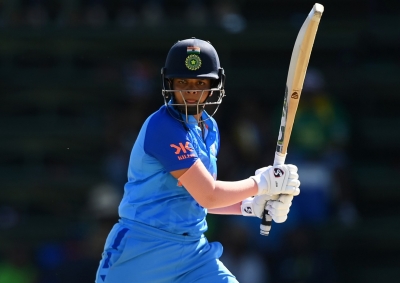 Benoni (South Africa) Jan 16 (IANS) Captain Shafali Verma hit a blistering 78 while her opening partner Shweta Sehrawat slammed 74 not out and carried her bat throughout the innings to set up India’s massive 122-run victory over UAE in their second Group D match of ICC U19 Women’s T20 World Cup at the Willowmoore Park on Monday.

Led by Shafali and Shweta’s entertaining knocks with the bat, apart from Richa Ghosh’s quickfire 49, India managed to post a mammoth 219/3 in their 20 overs, the first time a team in the tournament posted a 200+ score in an innings.

In reply, the Indian bowlers led by pacers Titas Sadhu and Shabnam MD were brilliant upfront, picking a wicket each and immaculate with their line and length to defend the huge total with great ease, restricting UAE to just 97/5 in their 20 overs.

Left-arm spinner Mannat Kashyap and leg-spinner Parshavi Chopra also picked a wicket each as India now sit on top of the Group D points table with two wins in as many matches. Their final match of Group D will be against Scotland on Wednesday.

Having been put in to bat first, Shafali, Shweta and Richa produced knocks that were aggressive and never let the momentum shift away at any stage in the match. Shafali and Shweta easily breezed to sharing a first-wicket partnership of 111.

While Shweta dropped anchor, Shafali was the fierce aggressor apart from some exquisite timing, hitting 12 fours and four sixes at a strike-rate of 229.41 in her 34-ball 78, before falling in the ninth over off Indhuja Nandakumar.

Shweta then took over and began hitting boundaries for fun, collecting ten overall to be unbeaten on 74 off 49 balls, with Richa joining in the fun too by hitting five fours and two sixes in her 29-ball 49.

On a day of carnage for the bowlers’ economy rates and UAE fielders dropping catches, medium pacer Samaira Dharnidharka’s 1/33 off her four overs was the nearest to reining the rampant Indians in.

The UAE threatened to respond aggressively in a tall chase of 220, with opener and captain Theerta Satish (16) slamming Shabnam for four fours in an opening over which would go for 17 runs.

But the moment she was dismissed off the fifth ball of that over by Shabnam, it was all downhill for the UAE. While they resisted being bundled out, a combination of accurate bowling by India and scoreboard pressure meant they never had a realistic chance of winning the match.

Road to recovery has begun, I am ready for the challenges ahead, says Pant after surgery