One big learning in T20 cricket is you don’t actually have just one gear: Smriti Mandhana 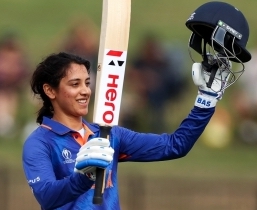 Mumbai, Jan 9 (IANS) India women’s vice-captain Smriti Mandhana is undoubtedly one of the classiest left-handed batters in modern-day cricket, who makes the art of batsmanship, especially while opening, look effortless.

The only Indian cricketer to win the ICC Women’s Cricketer of the Year award twice and being nominated for the third time in 2022, apart from earning a nomination for Women’s T20 Cricketer of the Year, Smriti has been at the forefront of the team in batting as well as leadership wise.

In an exclusive chat with IANS on the sidelines of being announced as the newest sponsored athlete of Herbalife nutrition, Smriti spoke about sacrifices made in terms of nutrition for better cricketing results, evolving as a T20 batter, being in the leadership unit of the Indian team and more.

Q. Your 2023 is starting off with your association with Herbalife. How do you foresee this partnership with a global nutrition brand like Herbalife?

Q. In terms of nutrition, can you give a gist of what have been the sacrifices made by you for maintaining optimum fitness levels for playing cricket?

A. There have been big sacrifices because I am a big foodie, like I love eating out. As a kid, I used to constantly eat out. But in the last five-six years from the time you really know that you have to be fit, it has become really important to be disciplined about what you eat and how much you are eating.

Last couple of years, it is a battle within your own mind, that you feel like eating some things. But again you can’t be really hard and just be like go all out. In life, you have to actually understand that when you actually have to get one cheat meal in a month or something like that. But then, it’s a battle again every day that you don’t actually want to have it even if it is there in front of you.

Q. Speaking about years, can you describe how 2022 has been a year for you and for women’s cricket?

A. 2022 has been a good year for me as well as women’s cricket. We had an amazing Commonwealth Games. It was a very different experience for us to be a part of a multi-sport event. We couldn’t win the gold medal (India won silver medal), but I think the whole journey was amazing.

Personally for me as well, a lot of things which I learnt and thought of the things I could do well, and I did well. So, 2022 had a lot of learnings, but it had been a big year for me as well as women’s cricket.

Q. How do you view 2023 as a year for the Indian women’s cricket team?

Q. Where have your improvements come as an opening batter in T20 cricket?

A. Well, firstly, like how my game style is, and what is more suited to my style, four to five years back, I had to make a big call in terms of how I want to go about my T20 cricket and what kind of strike rates, shots, I want to play and the kind of starts I want to give to my team.

I had to really work on a lot of things which all started from lofting more than actually playing drives. All of those things which I have applied and now when I look at myself in T20 cricket, I see trying to give very good and explosive starts to the team. When needed, I can also play the anchor role as well. The one big learning which I have had in T20 cricket is that you don’t actually have just one gear. So, now I feel confident as a T20 batter.

Q. How has the Indian team’s philosophy changed in terms of playing T20Is in the last few years?

A. In the Indian team, we now have a lot of youngsters and it’s a pretty young team. So, everyone really wants to play that aggressive brand of cricket. They want to go out there and express themselves, as well as win matches. You can see that in the kind of matches or the innings girls are playing or trying to improve their fitness and nutrition as well.

Everyone is trying to improve hard in every aspect and be at their actual best because Australia, England, New Zealand have been ahead of us in terms of fitness and nutrition. But I think here also, we are catching up on it in the last few years and I am sure we will reach a point where we are definitely beating them, but consistently to be at number one and all the girls are really striving hard for that.

Q. How has your role in the leadership group evolved in the Indian team, like from your debut in 2013 and to now being the vice-captain of the side?

A. It took only a few years from 2013 to 2016 or 2017, when I became the vice-captain in the T20 team. Now that we have all those girls who are around 17-18, for me and also for the players who have been playing for a couple of years, we have just one thing which we try to do and that is to maintain a good atmosphere in the dressing room.

We strive to give the kind of confidence to the young girls to actually go out and do whatever they can and not think about anything else. That is the only thing we as a leadership unit try to do in the dressing room and try to get them as comfortable as we can.

Q. Finally, if a young girl cricketer comes to you for advice related to nutrition, what would it be and why?

A. What has worked for me is actually being really disciplined about your nutrition and physical part of it, like doing your gym sessions regularly. Nutrition has been a big part of my journey in the last couple of years.