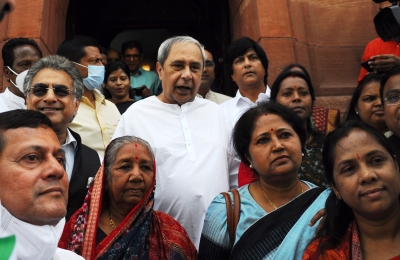 Bhubaneswar: Odisha Chief Minister Naveen Patnaik on Wednesday bought the first ticket of the FIH Men’s Hockey World Cup 2023 scheduled to be held in Odisha from January 13, 2023. He has paid Rs 500 for the ticket, officials said.

Hockey India President Dilip Tirkey handed over the ticket to Patnaik for the opening day matches to be played at Birsa Munda Hockey Stadium in Rourkela on January 13 next day.

The World Cup will be organised from January 13 to 29 next year at the newly constructed Birsa Munda Hockey Stadium, Rourkela and Kalinga Stadium, Bhubaneswar.

While 16 teams will participate in the prestigious world tournament, 24 matches will be played in Bhubaneswar and another 20 in Rourkela.

The online sale of tickets for the Hockey World Cup will commence soon, the official said. – IANS

New Delhi: The All India Football Federation (AIFF) has withdrawn India's bid to host the 2027 edition of the Senior Men's Asian Cup, for which it was shortlisted as the potential...

Rawalpindi: All-rounder Ben Stokes was rewarded for his daring second innings declaration and attacking field placement as England sealed a famous 74-run victory over Pakistan in a thrilling Day Five...

Dhaka: The Indian men's cricket team on Sunday announced that they have released wicketkeeper-batter Rishabh Pant from their squad for the ODI series against Bangladesh. A statement from the Board of...

Doha (Qatar): Argentina survived some anxious moments against Australia to register a fighting 2-1 win over and move into the quarter-finals of the FIFA World Cup. At the Ahmed Bin Ali...