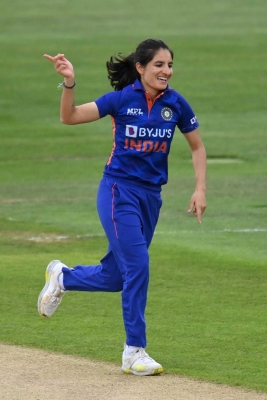 Dubai, Jan 25 (IANS) India pacer Renuka Singh Thakur was on Wednesday named as the ICC Emerging Women’s Cricketer of the Year 2022 after she impressed everybody with her magnificent displays of seam and swing bowling, last year.

Renuka got the better of Australia’s Darcie Brown, England’s Alice Capsey and compatriot, left-handed wicketkeeper-batter Yastika Bhatia to become the recipient of ICC Emerging Women’s Cricketer of the Year 2022.

With this, she also became the first Indian women’s cricketer to get the honour.

Renuka claimed 40 wickets for her country in 2022 in just 29 matches across the two white-ball formats, filling the void of the legendary pacer Jhulan Goswami. Able to swing the ball or find deviation off the surface, the right-arm pacer is most likely to be one of India’s most dependable bowlers in years to come.

In the ODIs, Renuka was outstanding, claiming 18 wickets at an average of just 14.88, of which eight came in two appearances against England, and seven in India’s series against Sri Lanka. Her best performance came against Australia on cricket’s return to Commonwealth Games, taking 4/18 with 16 dot balls, and leaving them at 34/4, though the eventual champions chased down India’s 154.

She was a thorn in the Australian line-up in the seven T20I meetings across the year, taking eight wickets, and her performances across the Commonwealth Games and Women’s Asia Cup show that she is no shrinking violet in tournament action, claiming 17 wickets in 11 matches, at an economy rate of just 5.21.

The Indian team is currently playing in a women’s T20I tri-series in South Africa and Renuka in a video posted by bcci.tv said she was happy to get the award.

“Then, the second best innings would be against England at Lord’s as it was a dream to play in that iconic venue and also won the series after so many years, so it was the best moment for me. I want to thank my family, teammates and coaches for this award.

It is because of them that I am getting this success in the last 12 months, where I have been backed and helped by the team management, captain, coaches, trainer and physios at the NCA,” she added.

Able to swing the ball or find deviation off the surface, Renuka will likely be one of India’s most dependable bowlers during the Women’s T20 World Cup, next month.

Melbourne, Jan 22 (IANS) India's Sania Mirza and her Kazakh partner Anna Danilina ended their Australian Open campaign after suffering a 4-6, 6-4, 2-6 loss at the hands of the Ukrainian-Belgian...