Festive spirit bubbles over despite beer ban and other controversies 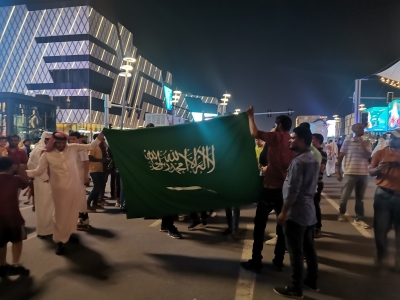 Doha: Football, fans and flags. These three words embody Qatar as a large number of international fans, expatriates and Qataris soak in the festive spirit of FIFA World Cup Qatar 2022 just more than 24 hours ahead of the grand event that begins on Sunday.

Groups of men and women carrying flags and in colorful jerseys could be seen around fan zones and places hosting festivities on Friday, the last weekend ahead of the tournament. The cyan and white jerseys of Argentina and the yellow and green of the Brazil squad have been the dominating colors as football revelers celebrate on Doha streets.

“We are lucky to be living in Qatar during the FIFA World Cup as so many fans from all over the world have converged here for the tournament,” said Mohammed Shahid, an Indian from Kerala who was dressed in a Brazil national team jersey at the Lusail Boulevard, which has been done up with flags and lights for the World Cup.

Enquiries at supermarkets and other stores selling flags and jerseys revealed that the offtake for Brazil jerseys and flags has been the highest. Amna Siddiqui, a girl from the Indian state of Karnataka, was found pleading with her father at a supermarket in Al Wakra to buy her the Brazilian standard.

“I have finally decided to yield to her badgering,” said her amused father as the 10-year-old Brazil fan emerged victorious from the shop located some 15 km from Doha.

The convivial spirit of the World Cup seems to have outshone a slew of allegations by international news outlets, especially those belonging to Western nations. A number of articles in international media have pointed the finger at Qatar, alleging human rights violations and abuse of workers’ rights as the country built eight advanced stadiums for the World Cup. Qatar denies the allegations and has pushed back against criticism.

The sale of alcoholic drinks at the World Cup has been hotly discussed in Western newspapers, with some criticizing the price of beer to be sold as exorbitant. Until a few weeks before the tournament, it was still seemingly unclear if alcohol will be sold at match venues and fan zones in the conservative Muslim country where the sale of liquor is strictly regulated.

FIFA ended the speculation on Friday when it announced a ban on the sale of alcoholic beverages near the eight stadiums where World Cup matches will be played in Qatar.

In a statement on its website, the world football body said: “Following discussions between host country authorities and FIFA, a decision has been made to focus the sale of alcoholic beverages on the FIFA Fan Festival, other fan destinations and licensed venues, removing sales points of beer from Qatar’s FIFA World Cup 2022 stadium perimeters.”

The announcement implies that alcohol will be sold at FIFA Fan Festivals, which will be held in designated places in the country where thousands of fans will congregate to watch matches on giant screens.

“FIFA will continue to ensure that the stadiums and surrounding areas provide an enjoyable, respectful and pleasant experience for all fans,” the world football body’s statement added.

Italy’s Daniele Orsato has been selected as the referee for the opening match to be played between Qatar and Ecuador at Al Bayt Stadium on Sunday. The 46-year-old is one of Europe’s most experienced referees, having been a game official since 2010. He was a video assistant referee at the 2018 edition of the FIFA World Cup in Russia.

The Ghana national team arrived in Doha Friday to participate in the World Cup. The African side is part of Group H alongside Portugal, Uruguay, and South Korea. Ghana will start its World Cup campaign by facing Portugal before it faces South Korea on November 28, ahead of concluding the group stage by facing Uruguay on December 2.

Ahmedabad: Right-handed opener Ruturaj Gaikwad on Monday hit a mind-boggling seven sixes in an over, the first time it's happened in List A cricket, while on the way to smashing 220...

New Delhi,: BCCI secretary Jay Shah on Sunday tweeted that the IPL 2022 final, which was held earlier this year, has set a Guinness World Record for the largest attendance in... 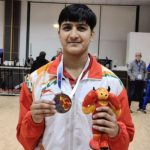 New Delhi: Reigning Asian Youth Champion Ravina showcased splendid tenacity to emerge victorious in her finals bout and added another gold to India's total medal tally of 11 at the IBA...

Messi, Fernandez goals guide Argentina to a 2-0 win over Mexico

Doha: Two-time winners Argentina kept their FIFA World Cup knockout stage qualification on course with a 2-0 win over Latin American rivals Mexico at Lusail Stadium in Qatar. On Saturday, in...

New Delhi: With India participating and organizing several sports events every year, the country has become part of a select group having their anti-doping law, Sujata Chaturvedi, Secretary of Sports,...

Qatar: Iran goals at the 98th minute of the game. First Cheshmi blown out Wales with a hammering goal and then Ramin hit the goal in the 100th minute of...

Auckland: Tom Latham reiterated on Friday why he's an ever-dependable middle-order batter for New Zealand by striking his seventh ODI hundred to seal a seven-wicket victory over India in the first...

PM Modi: IFFI and Indian cinema have carved out a niche for themselves on global stage