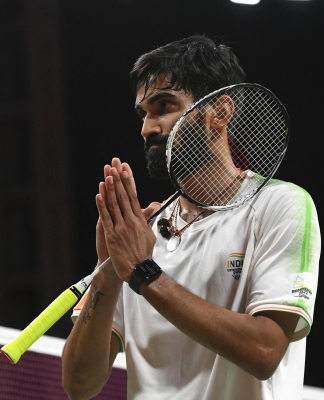 The Indian pair of Treesa Jolly and Gayatri Gopichand clinched a bronze medal in the badminton women’s singles after defeating Australia’s Chen Hsuan-Yu Wendy and Gronya Somerville 21-15, 21-19 in straight games.

This is Srikanth’s second singles medal at the Games as he won the silver in 2018 Gold Coast, and fourth overall. Additionally, this is the Indian’s second medal at the ongoing Games; he had won a silver medal in the mixed team event as well.

The 29-year-old defeated Singapore’s Jason Teh with a 21-15, 21-18 win to record his second medal of the Games, following Tuesday’s mixed team silver – and fourth Commonwealth medal in total – on Sunday evening.

Known to be one of the fastest movers in the badminton court, Teh had been in a gruelling encounter earlier in the day against India’s Lakshya Sen, who is later scheduled to play the final match against Malaysia’s Tze Yong Ng.

Earlier, World championships silver medallist Srikanth suffered a 21-13, 19-21, 10-21 defeat against 42nd-ranked Tze Yong NG in the other men’s singles semifinal. The 29-year-old was dominant in the first game but was upstaged in the next two games by the Malaysian opponent. After securing a 21-13 win in the first game, Srikanth lost a closely-fought second game 21-19 before the Malaysia eventually dominated Srikanth to win the decider 21-10.

Treesa Jolly and Gayatri Gopichand made it two third-place finishes for India with a 2-0 victory over Australia’s Chen Hsuan-yu and Gronya Somerville in the women’s doubles. The pair of Treesa and Gopichand cruised to a 21-15 win in the first game and had an emphatic start to the second, racing away to a 11-5 lead at the break.

Singapore’s Yeo Jia Min added women’s singles bronze to the mixed team bronze she won on Tuesday after a 2-0 victory over Kirsty Gilmour of Scotland.

The 23-year-old claimed a 21-14 win in the first game against the Gold Coast 2018 bronze medallist before a hard-fought second game was settled 22-20.

In the mixed doubles, Malaysia’s Tan Kian Meng and Lai Pei Jing added bronze to their mixed team gold medal as they saw off Adam Hall and Julie MacPherson of Scotland 2-0.

Pedal your way to a healthy lifestyle