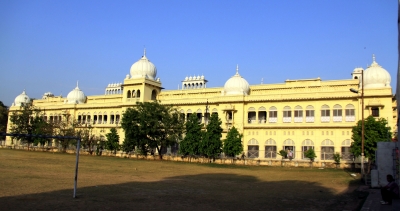 Lucknow:Lucknow University (LU) students are demanding that the ban on birthday celebrations on the campus should be lifted.

They are also seeking scrapping of entry and exit timings restrictions into the hostels.

Angry students have started holding demonstrations and are seeking the removal of chief proctor Rakesh Dwivedi.

The students have dubbed both the decisions as dictatorial.

It may be recalled that the LU had banned birthday celebrations after two groups of students clashed at the canteen during one such celebration.

The LU has also set the deadline of 8 p.m. for girls living in hostels and 10 p.m. for boys in hostel. Entry and exit of hostellers will not be allowed after deadline.

NSUI unit president Vishal Singh said, “LU should tighten its security instead of not allowing students to celebrate occasions on the campus.”

He said that restriction on hostel movement is also uncalled for as most students study in libraries till late at night.

In yet another incident of atrocities against domestic help came to fore where a lawyer has allegedly dragged and tugged a domestic worker out of an elevator at a residential...

Noted rights activist and former JNU student Umar Khalid on Friday walked out of Tihar Jail after he was granted a one-week interim bail in connection with Delhi riots case...