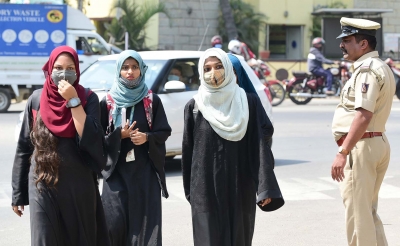 Hyderabad: AIMIM president Asaduddin Owaisi and two former Jammu and Kashmir chief ministers Omar Abdullah and Mehbooba Mufti on Tuesday said that the Karnataka High Court’s judgment on Hijab has struck a blow to the fundamental right to freedom of choice. On the other hand National Commission of Women chief Rekha Sharma hailed the verdict.

The Karnataka high court in its decision upheld ban on entry of girls into government schools wearing hijab. The three leaders expressed disappointment over the verdict.

”State should be allowed to interfere in religious rights only if such acts of worship harm others. Headscarf does not harm anyone.The ccourt verdicct suspended fundamental rights to freedom of religion, culture, freedom of speech and expression,”
Owaisi said in a series of tweets.

The Hyderabad MP observed that one religion has been targetted and its religious practice banned. He said the High Court order has forced kids to choose between education and Allah’s commands.

“For Muslims it’s Allah’s command to be educated while also following his strictures (salah, hijab, roza, etc). Now govt is forcing girls to choose. So far judiciary has declared masjids, keeping a beard & now hijab as non-essential. What is left of free expression of beliefs?,” he asked.

He hoped that this judgment will not be used to legitimise harassment of hijab wearing women. One can only hope and eventually be disappointed when this starts happening to hijab wearing women in banks, hospitals, public transport etc, he said.

He hoped that petitioners would appeal before the Supreme Court. He also hoped that All India Muslim Personal Law Board (AIMPLB) and organisations of other religious groups would appeal against this judgment.

“Preamble to the Constitution says that one has LIBERTY of thought, EXPRESSION, belief faith, and WORSHIP. If it is MY belief & faith that covering my head is essential then I have a right to EXPRESS it as I deem fit. For a devout Muslim, Hijab is also an act of worship,” he wrote.

He opined that even other people of the same religion have no right to decide essentiality. “It is between the individual and God. State should be allowed to interfere in religious rights only if such acts of worship harm others. Headscarf does not harm anyone.”

The MP also stated that banning headscarf definitely harms devout Muslim women and their families as it prevents them from accessing education. “The excuse being used is that uniform will ensure uniformity. How? Will kids not know who’s from a rich/poor family? Do caste names not denote background?,” he asked.

“What does uniform do to prevent teachers from discriminating? Globally, the experience has been that reasonable accommodations are made in school, police & army uniforms to reflect diversity.”

Owaisi recalled that when Ireland’s government changed the rules for police uniform to allow Hijab and Sikh turban, Modi government had welcomed it.

“So why double standards at home & abroad,” he asked, adding that Hijab and turbans of the uniform’s colours can be allowed to be worn.

“What is the consequence of all of this? First, govt created a problem where none existed. Children were wearing hijab, bangles, etc & going to school. Second, violence was instigated and counter-protests were held with saffron turbans. Are saffron turbans “essential”? Or only a “reaction” to hijab? Third, GO & HC order suspended fundamental rights. We saw media, police & admin harass hijab wearing students & even teachers. Kids have been even banned from writing exams. It’s a mass violation of civil rights,” the MP wrote.

“Very disappointed by the verdict of the Karnataka High Court. Regardless of what you may think about the hijab it’s not about an item of clothing, it’s about the right of a woman to choose how she wants to dress.

“That the court didn’t uphold this basic right is a travesty”, Omar Abdullah said on his twitter page.

“On one hand we talk about empowering women yet we are denying them the right to a simple choice. Its isn’t just about religion but the freedom to choose”.

Karnataka HC’s decision to uphold the Hijab ban is deeply disappointing,” Mehbooba Mufti, PDP president, said in a tweet. “On one hand we talk about empowering women yet we are denying them the right to a simple choice. Its isn’t just about religion but the freedom to choose,” she added.

However, National Commission for Women chairperson Rekha Sharma welcomed the High Court decision on Hijab ban, saying that students must follow the dress code prescribed inside an educational institution by the administration.
IANS