Jailed saints get land for camps in Magh Mela 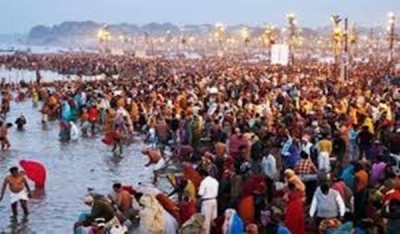 Prayagraj (Uttar Pradesh): A number of ‘tainted and jailed’ seers and religious organisations have been allotted land in the upcoming Magh mela township, leading to dissent among the seer fraternity.

Anand Giri, who is lodged in Naini Central Jail for alleged abetment to suicide of former Akhil Bhartiya Akhara Parishad chief mahant Narendra Giri, is one such ‘saint’.

Anand Giri, the founder of Ganga Sena Shivir, was arrested last year following the death of his guru Mahant Narendra Giri, who was found dead in his ashram on September 20.

The Ganga Sena is being allotted land in Sector 5.

It may be recalled that in 2019 during the Kumbh Mela, it was Mahant Narendra Giri who had requested the Mela administration not to give land to tainted institutions, after which the then mela official Vijay Kiran Anand had banned all such institutions.

Another ‘tainted’ saint who has been allotted land in the Magh Mela township is Ram Subhag Das of Saket Dham, popularly called Binaika Baba. He is presently in jail in Madhya Pradesh on charges of rape.

The Saket Dham camp is held on Triveni Road in Jhunsi side of the Ganga. The camp of this seer was popular for his liking of electronic gadgets. His camp always has all hi-tech arrangements and ‘Binaika Baba’ was always available on walkie-talkie. He was among the first to install CCTV cameras in his camp in the Mela area.

Swami Amrit Das will look after the camp of this organisation this year.

Magh Mela Adhikari Shesh Mani Pandey, when asked, said, “It is true that some seers are in jail, but their camps are visited by kalpvasis, who stay here every year. In such a situation, other people of the organisation applied for allotting land. The allotment has been done keeping in mind the interest of the people coming for kalpvas.”IANS