Why couldn’t the Military help migrant citizens in 2020? 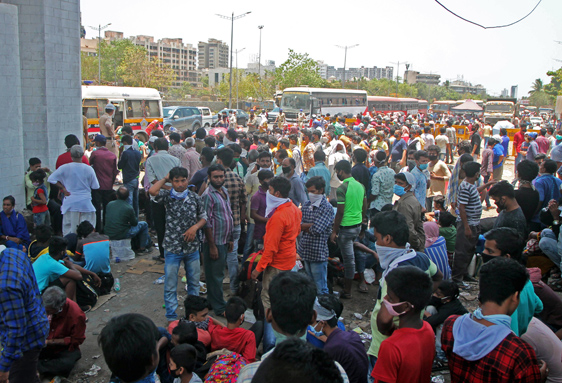 Maharashtra, May 23 (ANI): Migrants wait to board a bus to reach their destination amid ongoing COVID-19 lockdown, in Mumbai on Saturday. (ANI Photo)

New Delhi: Why did the Indianmilitary not help with the return of hordes of migrant workers, many with their families, to their home states and native places from Mumbai, Bangalore and other large cities when the government declared a lock down in March 2020, with just four hours’ notice?

Could not the vast fleet of road transport of the Army, along with military-dedicated rail coaches, transport aircraft of the IAF, and perhaps even ships of the Navy along coastal routes, have been utilized to speedily transport the millions who literally struggled on foot (many died en-route) to reach home thousands of miles away from their workplaces?

If the military is meant to help the country in an emergency, did this incident not qualify as an emergency? Does the military not intervene routinely during floods, other natural emergencies, and also man-made disasters like building collapses and mining accidents and the like?

Most people are vaguely aware that the military in peace-time prepares for war. Training, maintenance and development of weapons, procurement of systems to streamline operations are expressions that are heard in this context. Many are not aware of how time-consuming and strenuous this peace-time role of the military is. It is a full-time occupation. Nevertheless, given the unique training and equipment the armed forces have, there is another recognized legitimate peace-time role the military has been assigned by law, namely to aid the civil authority when called upon to do so. Military units routinely train for these exigencies. However, the military can only actually proceed to aid civil power on the express wish of the bureaucracy and political authority. To intervene unilaterally could be construed as over-reach and would be illegal.

So the operating principle is that the legal request of the civil authority must precede any military intervention. How does this interaction between the civil authority and the military occur? In localized instances, such as accidents (to cable-cars, or to buildings and bridges, or in mines etc.,) and smaller natural disasters or even low-level riots and disturbances, it is not uncommon for a district collector to ask local military units to step in if the capability of district and police officials seems inadequate to handle the situation. In case of help during disturbances, a specific written request from an authorized civil official is mandatory as a precursor to military forces being utilized to restore law and order. For state-wide and national emergencies, political authority would obviously need to make the request.

Is this current process adequate to deal with the present-day circumstances at the national level? Apparently not. That is clearly evident from the glaring instances at the national level of the military not having been requested to cooperate with the civil authority to alleviate our citizenry in distress. The most recent instance, in March – April 2020, which saw the migrant labour return-to-home-state forced-march, was preceded by the 2002 Gujarat riots, the 1992 Babri Masjid destruction and the 1984 anti-Sikh disturbances. The only two actual instances at the national level of the Indian military providing exemplary aid to civil power, that one is aware of, were during the 1947 Partition riots, and later, when the Navy rushed its ships to help the tsunami-afflicted regions of India (and abroad) in 2004. During the 2004 tsunami, as a matter of fact, naval ships were sailed immediately and governmental-assent was sought subsequently.

Why then, despite a legal and procedural process existing, are we found wanting in this vital matter of the military collaborating with the civil power in this country to alleviate citizenry in distress? Have these lapses in our system occurred due to professional deficiencies and errors or are they due to willful neglect or ignorance? Or a combination of these factors?

Is it possible that not all authorities, political and civil, are fully aware of the capabilities and capacities of the military to provide specific kinds of aid or intervention? This is unlikely at the national and state levels, given the plethora of legislation available to safeguard military assistance to the government, including provision of police and legal cover to military forces deployed for any length of time in aid to civil power.

Or is it rather that military cooperation with civil power in grave emergencies is avoided due to institutional prejudices and inherent distrust of the armed forces on the part of the politician and the bureaucrat? Or does one blame the politician, venal political expediency and perhaps plain political apathy, for all our lapses: Rajiv Gandhi and Co. for 1984, L K Advani and Narasimha Rao for 1992, Gujarat CM Narendra Modi for 2002, and PM Modi for 2020?

One thing is certain. Under the present (and hitherto) rules of business and procedural norms, the military hierarchy lack access to the highest political leaders of government. There are scant institutional processes in which free and frank discussions are held, nor is military advice available to the political leadership that is not bureaucratically attenuated and corrupted procedurally. The military has singularly failed in securing the total trust of the highest levels of political and bureaucratic leadership.

This failing has been as a result of generations of military leaders not having been able to withstand the gradual erosion of trust in their advice and their sagacity. They are not totally to blame for this erosion. Prior to Independence, the military had a bloated and over-heavy role in the Government of India. Regrettably the subsequent chipping away of their role and importance was not controlled or regulated, nor adequately resisted. As a result, the military has great power in actual hardware and organizational terms, but is powerless in the corridors of authority.

Regrettably the wisdom, the perceptiveness and the sagacity that should accompany such great physical power seems absent in the military hierarchy. Else the military would not be enmeshed in sordid controversies regarding its future structure, nor bogged down with petty bickering about turf amongst its top leaders.

Indian team reaches Nottingham ahead of Test series against England