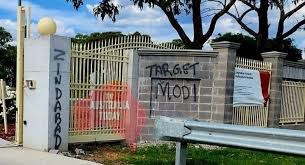 An Australian news outlet reported that a Hindu temple in Melbourne was allegedly vandalized by Khalistani supporters and defaced its wall with anti-Hindu graffiti. This has been the second attack on a temple within a week.

The vandalism of the historic Shri Shiva Vishnu Temple in Carrum Downs, Victoria, took place on Monday. The walls of the prominent BAPS Swaminarayan temple in the northern suburb of Mill Park were painted with anti-India and pro-separatists’ graffiti, The Australia Today reported, citing one Indian man, Patel. Patel did not reveal his first name fearing repercussions. He reportedly saw the walls painted with anti-India graffiti on Thursday.

“When I reached the temple today morning all walls were coloured with graffiti of Khalistani hatred towards Hindus,” Patel was quoted in the report as saying.

However, many devotees noticed the act of vandalism when they went to offer prayers as the three-day long “Thai Pongal” festival is being celebrated by the Tamil Hindu community, according to a report published in the Outlook. Usha Senthilnathan, a long-time devotee of Shri Shiva Vishnu Temple said, “We are a Tamil minority group in Australia, a lot of us came as refugees to escape the religious persecution.”

“I urge Premier Dan Andrews and Victoria Police to take strict action against these goons who are trying to scare the Victorian Hindu community,” added Senthilnathan.

Reaction of the Hindu community

It was disappointing to know the attacks on the temple, the Outlook quoted Hindu Council of Australia’s Victoria chapter President Makrand Bhagwat as saying. “I can’t tell you how upset I am for witnessing a second Hindu Temple vandalised for Khalistan propaganda.” “Our Temples vandalism is deplorable and should not be tolerated by the wider community.”

Many Hindus dared the separatists to go and draw graffiti on the Victorian Parliament building if they really have the courage and condemned the separatist group for targeting religious places of peaceful Hindu communities.