Bumrah hits Broad for 35 runs, claims world record of most runs hit in an over of Test cricket 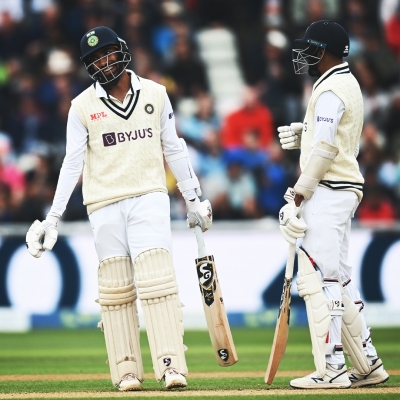 Birmingham: India skipper Jasprit Bumrah on Saturday claimed a world record in his debut Test match as a captain as he scored 35 runs off veteran England pacer Stuart Broad in the 84th over on day two of the rescheduled fifth Test against England at Edgbaston on Saturday.

Before Bumrah hammered Broad for four fours, two sixes besides picking up a single from the eight-ball over which also included a no-ball and five wides, India were 377/9 with England’s chances of keeping them under 400 looking bright.

Bumrah pulled the first ball from Stuart Broad in the 84th over for a boundary. It was a top-edge that Crawley very nearly got to, but it evaded him and bounced over the rope.

Broad again dug it short and it went high over wicketkeeper Sam Billings’ head for five wides. More agony followed for him as Bumrah bludgeoned a friendly full toss over mid-on for another boundary and then got an inside edge to fine leg for yet another boundary.

Bumrah fell while trying to swat Broad over deep square leg, but the ball sailed comfortably for the fourth boundary of the over. Another short ball from Broad was pulled brilliantly by Bumrah over fine leg for six, giving him the world record for scoring most runs in an over of Test cricket — 35.

In the process of inflicting a whirlwind carnage over Broad and England, Bumrah surpassed the previous record which was in the hands of Brian Lara, George Bailey and Keshav Maharaj at 28.

Co-incidentally, Broad has the dubious distinction of being hit for six sixes by Yuvraj Singh in an over during the inaugural Men’s T20 World Cup in South Africa in 2007. Clearly, he had a day to forget at Edgbaston despite reaching the 550 Test wickets mark.

Bumrah remained unbeaten on 31 off 16 balls and added 41 for the last wicket along with Mohammed Siraj (2) as India ended their first innings on 416 in 84.5 overs, with Rishabh Pant and Ravindra Jadeja top-scoring with 146 and 104 respectively. – IANS

In the first election on January 6, AAP and BJP members physically clashed AAP objects to LG naming the 10 aldermen without consulting the state government Oath-taking by the nominated...

‘Issue apology or else…’: Congress to BJP on ‘doctored’ Rahul video