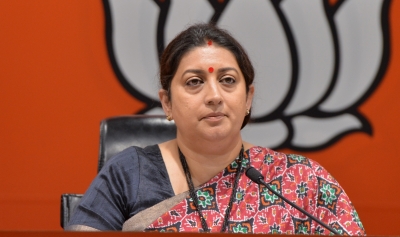 A war of words broke out between Congress and BJP leaders after Uttar Pradesh Congress leader Ajay Rai on Monday made a controversial remark against Union Minister for Women and Child Development Smriti Irani saying that the minister visits Amethi, her constituency, only to show “latkas and jhatkas”.

“Rajiv Gandhi, Rahul Gandhi and many members of the family have served the place. Smriti Irani only comes and does ‘latke jhatke’ and goes away. Congress workers want Rahul Gandhi to fight 2024 polls from there,” Rai said. He further said: “Most of the factories in Amethi are on the verge of closure. Half of the factories in Jagdishpur industrial area are lying shut. Smriti Irani only comes, shows ‘latka-jhatka’, and leaves.”

However, the unflattening reference to dance moves by Rai triggered sharp response from BJP spokesperson Shehzad Poonawala who said that it is not a ‘sanyog’ but a ‘prayog’ sponsored by the Gandhi family. “Rahul Gandhi loyalist Ajay Rai makes shocking “latke jhatke” comment on Smriti Irani ji. This is not a Sanyog – it is a prayog sponsored by first family to take political revenge because Smriti ji defeated the dynast – Congress even insulted 1st Woman Adivasi President,” Poonawala tweeted.

UP BJP spokesperson Anand Dubey said such a remark from a leader of the party which gave the woman prime minister to the nation is definitely “shameful”, terming it an “anti-women” statement. Dubey said prominent Congress leaders had been winning Lok Sabha elections from Amethi and Rae Bareli, but these districts “lagged behind in almost every parameter.”

“After the Narendra Modi-led BJP government came at the Centre, and the Yogi Adityanath-led government came in Uttar Pradesh, development is taking place in these districts. The people of Amethi had already rejected Rahul Gandhi in the 2019 Lok Sabha election,” Dubey said, according to PTI.

Irani had defeated Rahul Gandhi from Amethi in the 2019 Lok Sabha elections. Rahul Gandhi was also contesting from Wayanad seat from where he won the Parliamentary polls.

Kamal Haasan in Bharat Jodo Yatra: A move to join the DMK-Congress alliance?