PM rakes up Congress’ Goa history ahead of assembly polls 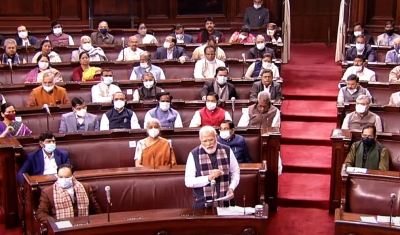 New Delhi: Prime Minister Narendra Modi on Tuesday in his reply to the ‘Motion of Thanks’ in the Rajya Sabha launched attack on Congress’ ‘historic’ track record when it comes to the state of Goa that is set to vote for its new assembly on February 14.

This year is an important year for Goa which is celebrating 60 years of its Independence. “Our friends from Congress must be listening and people of Goa should definitely listen to what I want to say,” Modi said and suggested how the then Congress government could have utilized Sardar Vallabhbhai Patel’s strategy for Hyderabad or Junagarh to bring in Goa – which was under Portuguese rule till 1961 – into the Indian Union, then Goa would not have been under foreign rule for 15 years after India got Independence.

“The media reports from that time show us how the then Prime Minister Pandit Nehru was worried most about his image at international level. He (Nehru) had thought that attacking the imperial government of Goa would damage his image as a global, peace leader. Let Goa suffer,” Modi said.

“Hence, when the satyagrahis were facing bullets from the foreign tyrant rulers, India’s Prime Minister refused to send Indian Army for liberating the land which is very much a part of India. The Prime Minister refused to help the satyagrahis then,” the Prime Minister said, and reminded the people of Goa, “This is the kind of atrocity that Congress heaped on it because of which Goa gained independence 15 years later. Goa’s many young freedom fighters lost their lives, many suffered lathi charges.”

Congress members in the House had walked out by then. Modi said, it would have been good if the friends from Congress were here as I am reminding them of what (Pandit) Nehru said on August 15, 1955 from the ramparts of the Red Fort. “Nobody should be under the false impression that we are set to take military action in Goa. There is no Indian Army anywhere near Goa. By creating chaotic conditions, people from inside (Goa) want to create a situation where we would be forced to send an army, we will not send in our army. We want a peaceful negotiation.”

Modi also reminded how Nehru had spoken about the Satyagrahis from India going to Goa in a sarcastic tone but said, “if they want to call themselves as Satyagrahis, they should abide by the principles. Satyagrahis do not need an army; they don’t demand an army.”

“This is what Congress did to Goa. People of Goa will never forget it,” Modi said.

Taunting the Congress on its claims of ‘freedom of expression’ being trampled, Modi said, “I want to expose their claims with an example of Mangeshkar family that hails from Goa.”

The Prime Minister also recalled an incident narrated by Pandit Hrudaynath Mangeshkar, brother of Lata Mangeshkar, who passed away two days ago. Hrudaynath Mangeshkar was thrown out of his job at AIR for composing a patriotic poem penned by V.D. Savarkar. “Mangeshkar had said in an interview, Savarkar had warned him of consequences and yet he went ahead and composed it,” Modi said, adding, “He was thrown out of his job within eight days.”

This is what was done to a son from Goa, he said and recounted other names who also “bore the brunt of talking against or disagreeing with a particular family.” (IANS)

Battle for UP: BJP manifesto has sops for all