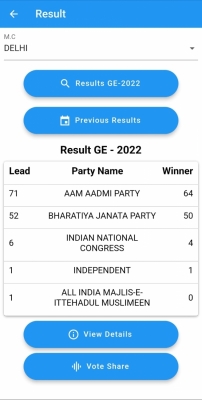 New Delhi : The Aam Aadmi Party (AAP) has won in 64 wards while BJP grabbed 50 seats as the counting is underway amid tight security in 42 centres for the December 4 Municipal Corporation of Delhi (MCD) polls.

As per officials trend around 11.40 a.m, the AAP is maintaining a lead in 71 seats and BJP is leading in 52. Congress, which has won in four wards, is leading in six wards. One independent candidate has won.

Counting for the 250 wards of the civic agency began at 8 a.m. on Wednesday amid tight security arrangements at 42 centres. IANS