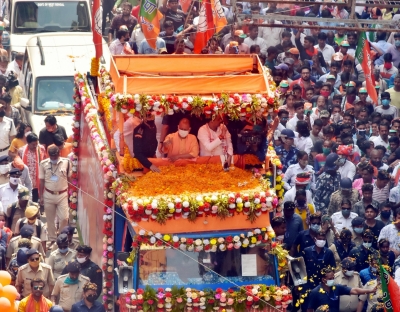 Mumbai: Maharashtra’s opposition parties on Thursday attacked Uttar Pradesh Chief Minister Yogi Adityanath’s “road show” for investors in Mumbai with the Congress and Shiv Sena-UBT labelling it as politics of “religion and business”.

Currently on a 2-day visit to Mumbai, Adityanath flagged off a road-show in south Mumbai on Thursday morning and then was closeted with representatives of India Inc, top bankers, business honchos, and film personalities to attract investments for the 3-day global investors meet scheduled in UP from February 10.

“Yogi is welcome to come and discuss investment prospects for UP… but what is the need for him to hold a road-show in Mumbai? It is nothing but politics of business and this must stop,” Shiv Sena MP and chief spokesperson Sanjay Raut said.

Congress state President Nana Patole wondered what was the compulsion to hold a road-show in Mumbai to attract investments in UP when Adityanath is known for playing the politics of religion.

He suspected it was a ploy to divert Maharashtra’s investments to UP, but Raut warned such a move will not be tolerated.

“Do you expect them (Shinde-Fadnavis) to carry out a road-show on the streets of Davos? Then why does Yogi come to conduct a road show in Mumbai,” he asked.

Involving Shinde and Fadnavis, Patole claimed that the previous Maha Vikas Aghadi government in the state was toppled with the intention of moving out big projects and diverting huge investments from Maharashtra to Gujarat, UP and other BJP-ruled states.

“UP’s law and order situation is very bad. Yogi is bulldozing the homes of the poor, minorities, and Dalits and women are unsafe in his rule. Who will dare to invest in such a state where the CM plays politics of religion,” said Patole sharply.

Referring to Adityanath’s meetings with some Bollywood actors on Wednesday, Raut softened his stance, saying that if UP is keen on setting a film industry in that state, it would be welcome as the move could spur the development there.

“It was Dadasaheb Phalke who introduced the film industry and bequeathed it to the whole nation, it belongs to everybody… There are already very big film industries in the south, Andhra Pradesh and I feel the film business should come up in every state,” he said.

However, Raut said it would be naive if anybody feels that the film industry will shift from Mumbai or top stars will also go to settle there, but added that all would help contribute to the development of a film-city in UP.

Concurring, Patole said that earlier, Adityanath made attempts to grab and take away the film industry but after the efforts failed, the entire Bollywood was tarnished as a “den of drugs and vice”, especially during the tenure of the MVA.

“This is nothing but an attempt to undermine the state and reduce its importance, now with the help of the ‘khokha’ (cash) government and it won’t succeed,” he said.
IANS