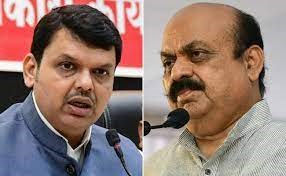 Reacting to the development, Maharashtra CM Eknath Shinde proclaimed on Thursday that they wouldn’t forfeit even an inch of land. Fadnavis on Wednesday assured that no village from Maharashtra will go anywhere, replying to which Bommai called his statement provocative. It with statements from both the BJP ruled states  Deputy Chief Minister Devendra Fadnavis after Bommai claimed that villages in Maharashtra’s Sangli district passed a resolution wanting to merge with Karnataka after facing an acute water crisis.

What is the age-old dispute?

The dispute dates back to 1960 since the reorganisation of the states on the linguistic lines. It is often referred to as the Belagavi or Belgaon border dispute, where Maharashtra wants to claim back Belgaum (also called Belagavi) district and 80 other Marathi-speaking villages which are in the control of the southern state. Following a memorandum from the Maharashtra government on 23 June 1957, the Government of India constituted the Mahajan Committee on 5 June 1960 to decide on the reorganisation of Belagavi, but no agreement could be reached and the case now lies before the Supreme Court. Maharashtra has insisted that nearly 865 border villages/cities, including the likes of Nipani, Belagavi (previously Belgaum), and Karwar, should be merged with the state. Meanwhile, Karnataka has declared its rights on 260 Kannada-speaking border villages that are part of Maharashtra.

The latest controversy erupted after Maharashtra CM on Monday appointed two ministers Chandrakant Patil and Shambhuraj Desai to coordinate with the state’s legal team on the pending matter ahead of the hearing in the Supreme Court. The matter was earlier scheduled for November 23 but has been deferred. Meanwhile, Karnataka CM Basavaraj Bommai reportedly claimed that some villages on the border passed resolutions to merge with Karnataka in the past. He said on Monday that the state has formed a formidable legal team of senior lawyers to deal with the border dispute when it comes up in the apex court.

New Delhi: The analysis of affidavits of candidates contesting the Municipal Corporation of Delhi (MCD) polls this year showed that major political parties have relied more on women candidates this...

The Uttar Pradesh police arrested a Hindu man who pretended to be a Muslim and supported Aaftab Amin Poolawala for brutal killing of his live-in girlfriend Shraddha Walkar (27). The...

‘They were taught lesson in 2002,’ Amit Shah brings up Gujarat riots during poll campaign

'During the Congress rule in Gujarat (before 1995), communal riots were rampant' 'Congress used to incite people of different communities and castes to fight against each other' 'BJP has established...

‘Even in the twenty-first century, we are left grappling with casteism’ India is still “unable to break the shackles of casteism Even secular government is forced to provide for separate...

The revolt in the party “was funded by the BJP” and enabled by senior BJP leaders including Amit Shah The (Congress) High Command cannot make Sachin Pilot the Chief Minister...a...

The incident occurred on Friday, when some Dalits from Sargur in HD Kote taluk had arrived at the village to attend a wedding A local man from the area gathering...