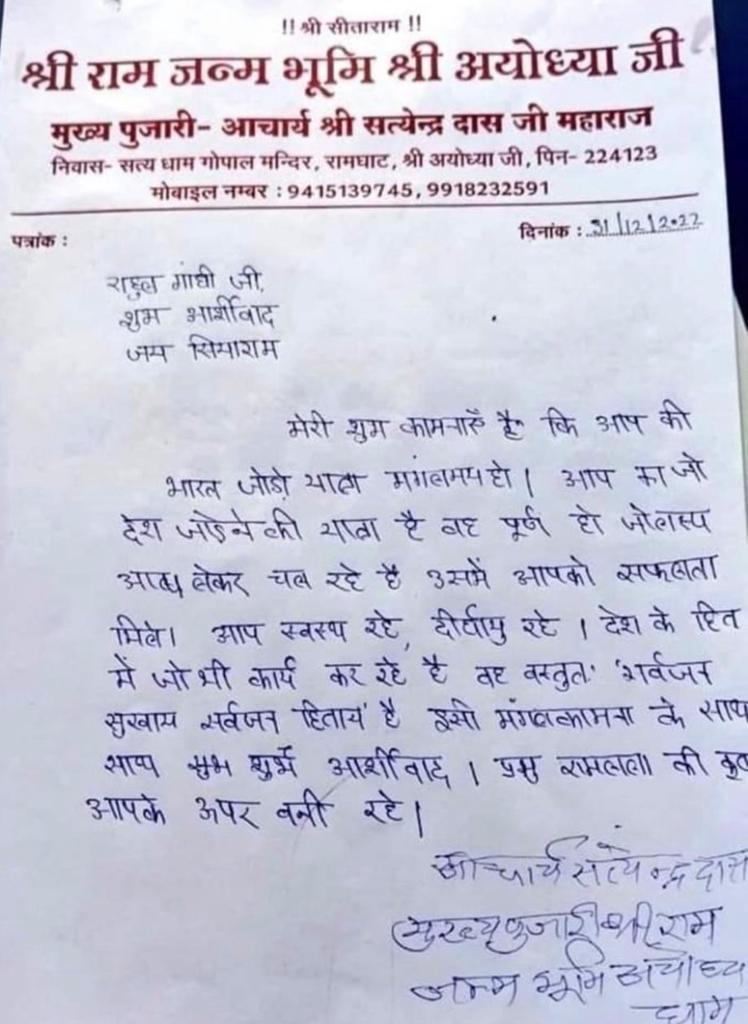 In a significant boost to Rahul Gandhi-led Bharat Jodo Yatra, the Ram temple chief priest in Ayodhya supported the Gandhi scion countrywide march and wished him a success, saying that the blessings of Lord Ram would always be upon him.

As Rahul Gandhi’s march entered Uttar Pradesh,chief priest of Ram Janmabhoomi temple Acharya Satyendra Das said that the Congress leader was ‘working for a noble cause.’ However, he informed that he won’t be able to join it due to health issues.

In a letter to Gandhi, Das extended his support for the move by the Congress to unite the country. “I hope and pray that the mission for which you are fighting may be successful. I bless you for your long life,” the letter stated.

“You are working for the noble cause that is ‘sarvajan hitay sarvjan sukhaay’ in the interest of people and for the happiness of the people. I wish the blessings of Lord Rama be upon you always,” the letter added.

Rahul Gandhi repeatedly said that the Narendra Modi dispensation at the Centre has been engaged in creating a rift in the society that ought to be contested and responded with love. He also came down on news media outlets for orchestrating ‘Hindu-Muslim’ debate round the clock to divide people along communal lines.

Sunil Krishna Gautam, Ayodhya District Spokesperson of the Congress Party, said that while extending his support to the party’s Bharat Jodo Yatra, Acharya, Das has written to Rahul Gandhi and said he would have joined the yatra but due to health reasons, he won’t be able to participate but has extended his moral support to the yatra through the letter, according to the India Today.

“In support of the Bharat Jodo Yatra being taken out by Rahul Gandhi throughout the country, Acharya Satyendra Das of Ayodhya has written a letter supporting Rahul Gandhi. There is support for this Bharat Jodo Yatra, which contains the message of Sarvajan Sukhaya,” said Gautam.

After a nine-day break, Rahul Gandhi’s resumed his Yatra in Delhi on Tuesday. The Yatra, which started from Kanyakumari on September 7, has covered parts of Tamil Nadu, Kerala, Karnataka, Andhra Pradesh, Telangana, Madhya Pradesh, Rajasthan and Maharashtra and Haryana. It will culminate in Jammu and Kashmir. It is the longest march on foot by any Indian politician in the history of India, the Congress said.

Meanwhile, Congress general secretary KC Venugopal said, “After the Bharat Jodo Yatra, the Congress will launch a two-month ‘Hath Se Hath Jodo Campaign’. As part of this initiative, Priyanka Gandhi Vadra will lead foot marches and rallies with women members in every state capital to spread the message of the ‘Bharat Jodo Yatra’.

Death occurred due to shock, injury to head, as per post-mortem report