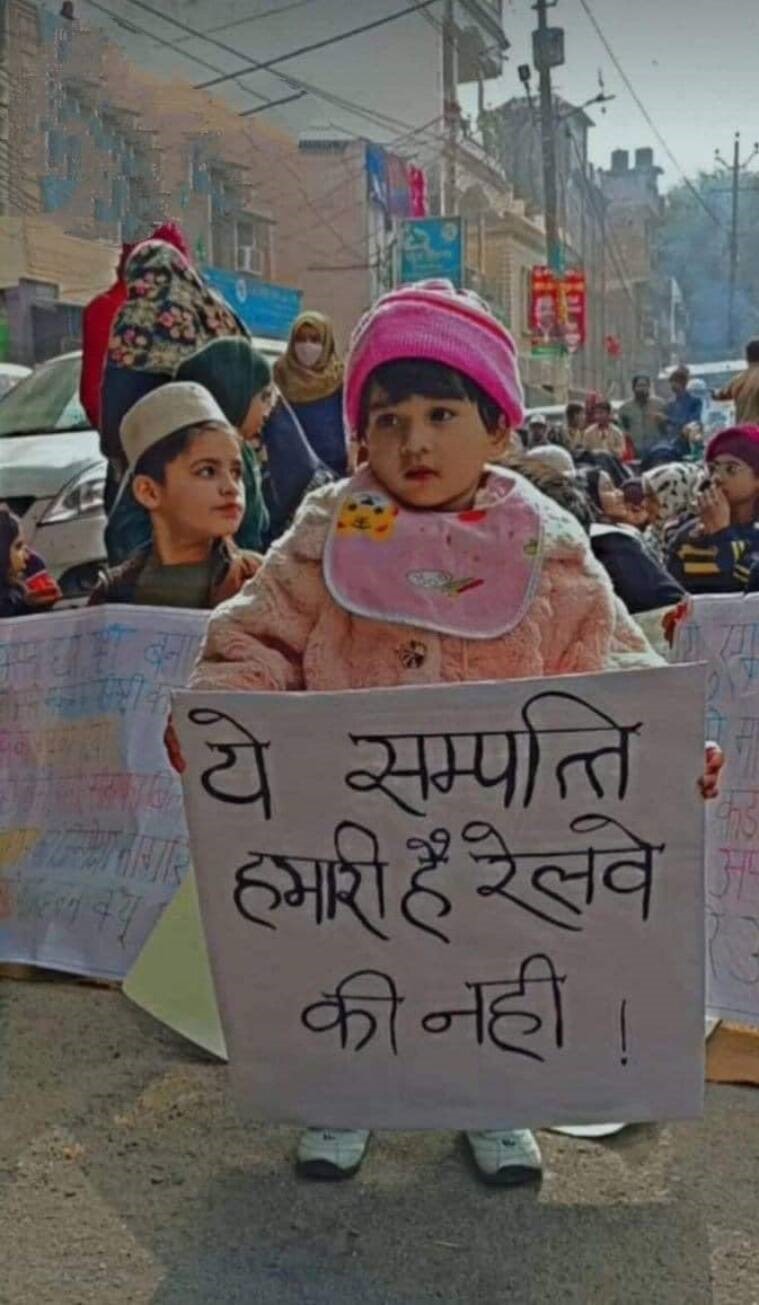 Children at protest site in Haldwani in Uttarakhand. (File photo)

An estimated 50,000 people, mostly Muslims, have been put at risk of being made homeless, thanks to the Uttarakhand high court’s order of clearing the ‘constructions on Railway land’ in Haldwani district, claimed a visiting fact finding team, while issuing a report encapsulating the details of the case running over a decade.

The estimation of people facing eviction has, however, not officially been confirmed.

It is to be noted that a division bench of justices Sharad Sharma and RC Khulbe on December 21 directed demolition of constructions over “encroached railway land” at Banbhoolpura area of Haldwani district on a week’s notice. Following the order, Railways is all set to send eviction notices to more than 4300 families living there.

Joint teams of railway and revenue officials also conducted a drone survey last week of December and started demarcating the “encroached areas”, as per media reports.

The residents, mostly living there for 40-50 year, are raising their voice against the order, registering their protest, but in vain, said the report of the fact finding team.

According to the report, a total of 4,365 households on 78 acres of land in the locality have been asked to vacate the area till January 7, failing which they would be removed by force.

The local authorities and staff are prepared to follow the court order. Bulldozers are set all across the localities such as Ghafur Nagar, Indira Nagar, Nayi Basti and Line No. 17, 18, 19 and 20 – all densely populated living there for several decades, said the report.

According to sources, encroachments include around 20 mosques and nine temples and schools.

While the issue has been gaining momentum in the news media for a couple of weeks, there is deafening silence in the corridors of power since the suffers are mostly Muslims, claimed noted civil rights activist Nadeem Khan who led half a dozen activists to the affected Banbhoolpura area on January 2.

Aggrieved by the order, the Jan Sahyog Sewa Samiti, representing private parties, approached the Supreme Court along with the state government. It informed the top court that it is not even clear whether the land in question belongs to Railways. “The entire area contained permanent structures – including schools, colleges, health centers, houses, commercial sites, mosques, and temples – and the occupation on it has been continuing from a date before Independence. The possession of the petitioners has been for several decades,” the petitioners said.

The petitioners also brought the apex court’s attention to the documents, indicating that they are in possession of the land based on government leases executed in their favor.

The Supreme Court will hear the plea on January 5.

AIMIM chief Asaduddin Owaisi expressed his grief over the order and said, “How can it be an encroachment when there are three government inter-college in the area?” AIMIM Uttarakhand President Nayyer Kazmi met the to-be-affected families on the railway lands and offered them his full support.

The Congress has opposed the move and accused the ruling BJP government of not arguing the case properly in court and making excuses later.

“They have been living in the area for 70 years. There is a mosque, temple, overhead water tank, a PHC, a sewer line laid in 1970, two inter colleges, and a primary school,” Nizamuddin, a former MLA from Manglaur, said. “We appeal to the prime minister, the railway ministry and the chief minister to take a humane view of the matter and stop the removal of so-called encroachments,” he said.

The issue came to fore in 2007 when the demand of an Uttarakhand High Court Bar Association member for running a train between Allahabad and Kathgodam was turned down in absence of land required. The Association member claimed there “had been an encroachment on 29 acres of railway land” near Haldwani railway station. The Railway in an affidavit filed in the same year informed the High Court that got cleared 10 of the 29 acres of land from encroachers and sought the court to direct state authorities to take back the rest of the land. However, the issue subsided and no further demolition was carried out.

Interestingly, the issue resurfaced in 2014 when one Ravi Shankar Joshi filed a PIL in the High Court, praying it to order an investigation into the collapse of a bridge – which was constructed in 2003 on Gola river. The bridge had collapsed three-four years after its construction. After hearing the petitioner, the HC appointed a court commission which subsequently submitted a report, alleging that “encroachers residing close to the railway track indulged in illegal mining that caused the bridge collapse”.

Following the court commissioners’ report, the High Court summoned the Railway – which once again claimed that its 29 acres of land have been encroached upon. The high court passed an interim order on November 9, 2016, directing authorities to remove alleged encroachment from the Railway property. However, the state government then requested the court to review its order. It argued the removal of the “encroachers” could not be undertaken as there was no demarcation of the Railway property. On January 10, 2017, the High Court once directed the state government to ensure removal of the alleged encroachment.