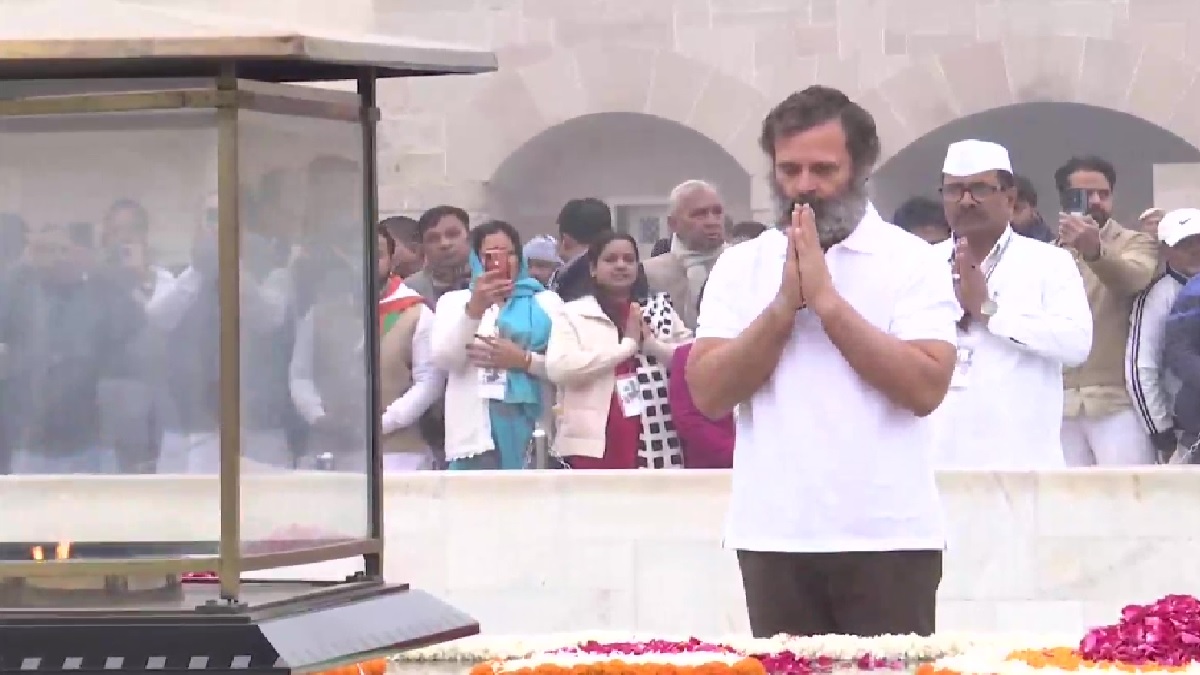 While Rahul Gandhi’s visit to the ‘samadhi’ of Mahatma Gandhi and several former prime ministers in a T-shirt amid the freezing cold wave created a social media abuzz, the BJP faced embarrassment after it claimed that the Gandhi scion had taken a break from the ‘Bharat Jodo Yatra’ for a vacation abroad.

The Congress reiterated that the BJP is so much rattled by the success of the nation-wide march that it is desperately trying to defame Rahul Gandhi in an attempt to derail it. Congress general secretary Jairam Ramesh claimed that the BJP was sending Intelligence Bureau sleuths to the Bharat Jodo Yatra campsite and was “terrorising” those who met Gandhi during the Yatra, reported PTI. ‘The BJP is misusing the government agencies,” he told reporters, alleging that Haryana’s “double-engine” BJP government would not do anything till there were orders from Delhi.

Ramesh alleged that the Congress has received notices from the Election Commission and the National Commission for Protection of Child Rights, while the Prime Minister goes to Gujarat and has children campaign for him and his party, but the election Commission never even takes any notice, reported news agency PTI.

Taking a swipe at the saffron party, Congress leader Supriya Shrinate tweeted a video of a press conference, where she said, “BJP leaders were claiming Rahul Gandhi will break his yatra to take a vacation abroad during Christmas but today amid chilling winter in Delhi when the BJP leaders covered in blankets are plotting to divide the nation, Rahul Gandhi visited ‘samadhis’ of Mahatma Gandhi, Nehru Ji,…Shashtri Ji and paid tributes to them”.

Shrinate asked, “Since today their lies have been debunked yet again, will the ‘mafiveer’ army issue an apology?” She further claimed the BJP was “habituated” to issuing apologies so “it shouldn’t be a problem for them now”.

Notably, Congress leader Jairam Ramesh had earlier demanded an apology from the BJP for spreading falsehood about Rahul’s vacation.

Shrinate did not name any BJP leader, her remarks come days after Union minister Pralhad Joshi claimed Rahul Gandhi is “breaking the yatra to holiday abroad”.

“We waited for the entire #WinterSession2022 to see you & your leader in the House, but to no avail, but as always, your leader is breaking the Yatra to holiday abroad. You remembered parliament now!” Joshi had tweeted on Thursday in response to a separate tweet by Ramesh.

Rahul Gandhi visited the samadhis of Mahatma Gandhi and former prime ministers, including Atal Bihari Vajpayee, on the Delhi leg of the Bharat Jodo Yatra,, according to the Hindustan Times. Rahul Gandhi-led ‘yatra’ entered Delhi on Saturday and is on its 108th day since the launch.

Meanwhile, social media is abuzz with the photographs of Rahul Gandhi in T-shirt in the chilling cold with many commenting the bravado of the Congress leader. On this, one of the Congress’s most popular voices, Kanahiya Kumar said that Rahul Gandhi’s body has become “proof” after enduring “attacks of hatred” from the BJP, which he said is especially fond of him. “When you face so many attacks, your body becomes proof,” he told NDTV.

Ramesh said that the Bharat Jodo Yatra had started with 120 ‘Bharat Yatris,’ a number that has risen to 150 and will touch 200 by the end of the Yatra, when they would have walked a distance of 3,570 km from Kanyakumari to Kashmir, according to PTI.

Mandaviya interacts with IMA doctors, urges them to join fight against Covid