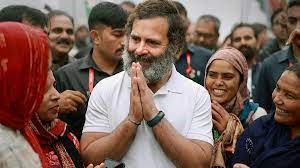 Rahul Gandhi marched through Delhi amid calls by the Health Minister to follow Covid protocols. Gandhi said that the BJP government was spreading hatred between Hindus and Muslims to divert the country from real issues. Gandhi also said, “this is not PM Modi’s, but Ambani and Adani’s government”.

“It is not Narendra Modi’s government. It is Ambani and Adani government. Hindu-Muslim is being done to divert attention from the real issues. Today degree holder youths are selling ‘pakoras’,” Rahul Gandhi said at a rally.

He also hit out at media saying that the television news channels and some publications are under pressure. They are not performing their duty with honesty, he said. In fact, the news media is also responsible for growing hatred and animosity in the society.

He, however, said people love peace, adding that he has come across thousands of people who do not want to live in the India the BJP-RSS wanted to build.

“I walked 2,800 km so far. Throughout my journey, I didn’t see any hatred… But the BJP is busy spreading Hindu-Muslim hatred 24×7,” Gandhi said as Congress president Mallikarjun Kharge, veteran actor Kamal Hassan and other leaders of the party joined him at Red Fort, according to NDTV.

He added: “Common man of the country is now talking about love. In every state, lakhs have joined the yatra. I have told people of RSS and BJP that we are here to open shop of love in your ‘bazar’ of hatred.”

The Gandhi scion, addressing party workers, asserted that the purpose of the march is to open a ‘mohabbat ki dukaan’ amid a ‘nafrat ka bazaar’ (market of hatred).