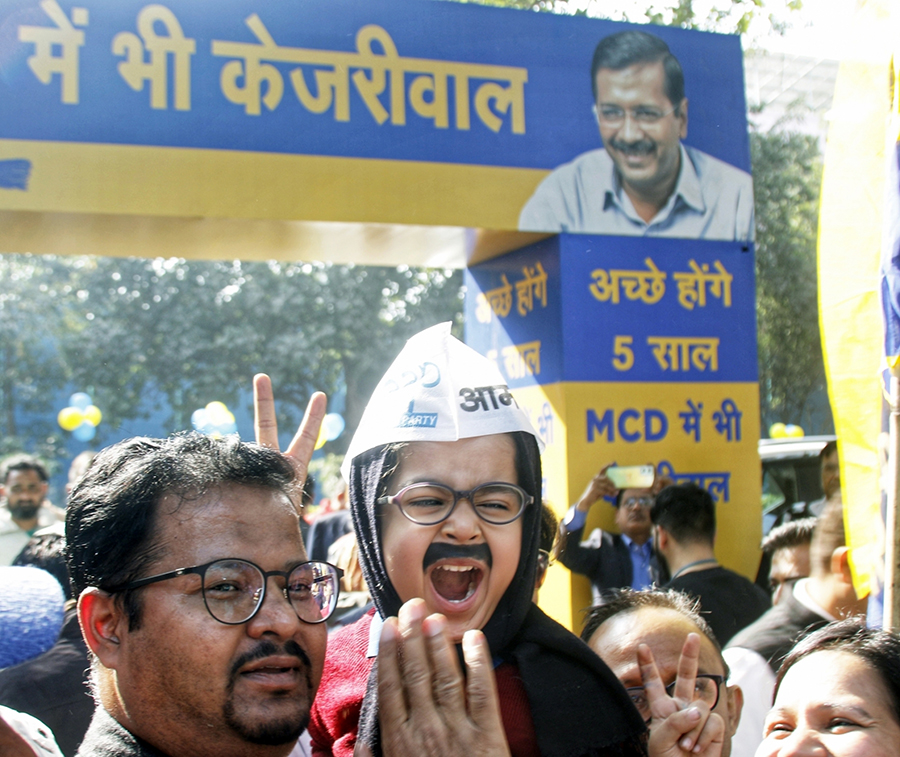 New Delhi: Avyaan Tomar dressed as AAP national convener Arvind Kejriwal and participated in the celebration with AAP workers as the party leads in the MCD polls during counting, at the party office in New Delhi on Wednesday, December 07, 2022. (Photo: Wasim Sarvar/IANS)

New Delhi : The Aam Aadmi Party (AAP) on Wednesday won the prestigious battle for the Municipal Corporation of Delhi (MCD), ending the 15 year-rule of the BJP.

After winning 126 wards, the AAP is leading on eight seats while BJP is stuck on 97 as the counting is underway in 42 centres.

The BJP is leading in six wards, as per official trends.

Congress won seven wards and is leading in three others while three independent candidates have also managed to win.

Counting for the 250 wards of the civic agency began at 8 a.m. on Wednesday amid tight security arrangements at 42 centres. There are a total of 1,349 candidates in the fray.

This was the first election after the MCD was reunified earlier this year. The polls had witnessed a voter turnout of only 50.48 per cent, just over 73 lakh people from the total of 1.45 crore eligible voters.

Earlier in the day, Chief Minister Arvind Kejriwal held a meeting with his deputy Manish Sisodia and other senior AAP leaders, at his residence.

Addressing the media at the party headquarters, spokesperson Sanjeev Jha said that the Mayor will be from AAP.

“The BJP has covered Delhi in garbage, it’ll be cleaned and Arvind Kejriwal’s government will be formed in MCD. People of Delhi had decided to bring AAP in MCD so that Delhi becomes clean and beautiful,” he said. IANS