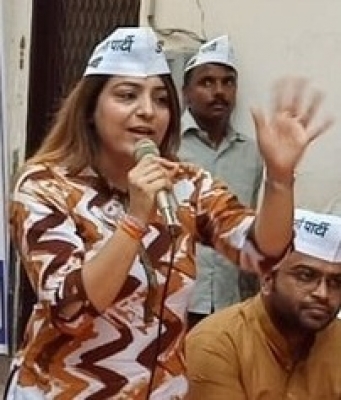 New Delhi : Weeks after the Aam Aadmi Party (AAP) won the Municipal Corporation of Delhi (MCD) election, the party on Friday announced candidates for the mayor and deputy mayor posts.

Shelly Oberoi, councillor from ward No. 86 of Patel Nagar constituency, has been named as the mayoral candidate, and Aale Mohammad Iqbal has been named for the post of deputy mayor.

Shelly Oberoi is a former Delhi University professor and a first-time councillor who won the Delhi civic body election from the BJP stronghold. Aale Mohammad Iqbal is the son of MLA and AAP leader Shoaib Iqbal from Matia Mahal constituency. He won by the biggest margin of over 17,000 votes.

The party has named four persons as candidates for the election of the standing committee members — Mohammad Aamil Malik from Sri Ram Colony, Raminder Kaur from Fateh Nagar, Mohini Jeenwal from Sunder Nagri, and Sarika Chaudhary from Daryaganj.

At the first MCD meeting to be held on January 6, the 250 municipal councillors will take oath and elect the mayor and deputy mayor besides six members of the standing committee. The post of the mayor is reserved for a female councillor in the first of the MCD’s five-year tenure.

However, the party’s national secretary Pankaj Gupta said that Shelly Oberoi will remain on the post for three months only. After the mayor is elected on January 6, he will remain in office till April. The election of mayor will be held again in April.

The electoral college for the election of mayor includes 250 elected councillors, seven members of the Lok Sabha, three members of the Rajya Sabha and 1/5th of the members of the Delhi Assembly (13 MLAs) nominated by the Speaker by rotation every year.

India to send fever drugs to China amid Covid surge