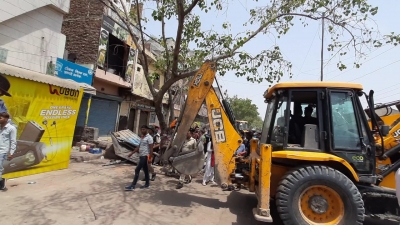 The anti-encroachment drive has the potential to make or bulldoze the poll prospect of the ruling party anywhere in India. History is witness to this fact.

In the living memory the first such campaign on all-India level was launched during Emergency, which also led to the killing of officially 10 people in police firing at Turkoman Gate (the unofficial toll was much higher) in Delhi on April 18, 1976 . The then Indira Gandhi regime undertook a beautification campaign in Delhi and in the process tried to clear the slum colonies of the area which were in existence since the time of Mughals.

However, in rest of the country it largely remained peaceful with people themselves voluntarily agreeing–rather out of fear–to demolish the encroached portion of their houses, shops etc once various municipal corporations and municipalities cracked the whip.

But there is a significant difference in the anti-encroachment drive carried out during the high time of 21-month long Emergency between June 25, 1975 and March 24, 1977 and the one being undertaken now.

While the Emergency incident remained unreported in the media because of strict censorship the one being carried out in the present era is gettting more than due coverage. Even the Turkoman Gate killing and bulldozing of residents could be known by a small section of people through international radio broadcast such as BBC, then based in London. Today the whole exercise is being highlighted by the television channels throughout the day and night.

It is also true that in the name of media there was only government-controlled All India Radio and Aakashvani as well as privately-owned newspapers then, whereas there is information explosion now.
But whether it was the blacking out of the news during Emergency or excessive reporting of the demolition drive the purpose in both the cases was one. If the government coerced the media not to publish the news of the killings committed in the name of demolition, today most of the anchors and reporters are supporting the government move.

The other difference between the two drives is that while the Indira Gandhi government was voted out of power less than a year after the Turkoman Gate tragedy, four and a half decades later the ruling party has recently won Assembly elections in four out of five states. During the election campaign in Uttar Pradesh it made the bulldozer as a symbol of the ‘achievement’ of the Yogi government.

In the name of bulldozer the Bharatiya Janata Party (BJP) hopes to win more state and national elections.
It is true that Turkoman Gate is a Muslim-dominated area of the walled city yet the drive was as such not communal. In contrast it is being alleged that the pre- and post-Ramnavmi demolition campaign is more or less selective. Be it in UP or Madhya Pradesh or Delhi most of those who were targeted are Muslims. The phenomenon actually generated pace after the communal disturbances in respective places.

While the UP chief minister earned the sobriquet of Bulldozer Baba in the case of Indira Gandhi it was quite different. She was voted out of power in the Lok Sabha poll held on March 16, 1977.
More than the crackdown on and arrest of her political opponents, it was the excesses committed during the Emergency, especially the Turkoman Gate killing, which turned the public sentiment against the then government.

There was no dearth of ‘chamchas’ (blind supporters) of Indira Gandhi then who in public would openly support the beautification drive, but in private they would concede that the government is going overboard. After Indira Gandhi announced election on January 19, 1977 many Congressmen and women, including top ministers such as Jagjivan Ram, Hemvati Nandan Bahuguna (father of the present BJP MP, Reeta Bahuguna Joshi) deserted the party. Within two months a new outfit, Janata Party, not only came into existence, but snatched power. The crimes committed in the name of anti-encroachment drive was one of the major election plank. The supporters of Congress were unable to defend it.

In contrast the ‘bhakts’ of today are busy defending the demolition drive and see in it a political prospect. The victory in UP, in particular, has boosted their faith on bulldozer.

They have reason to feel elated as the British PM, Boris Johnson, during his recent visit to Ahmedabad, took time off to get photographed on a JCB machine.

But the moot question is: how long will this exercise pay political dividend. – INDIA NEWS STREAM

Congress wants caste census report out, promises 50% quota for below 50