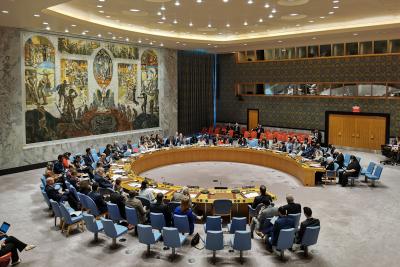 The annual high level segment of the United Nations General Assembly, currently on in New York, is increasingly reflective of just how redundant the UN has become and just how desperate is the need for reform if the UN Organisation is to survive.

Almost 150 leaders from across the world have assembled in New York for the 77th UNGA session, the year’s largest diplomatic gathering, as the world confronts the grim outlook of war, humanitarian crises, food and energy shortages, climate change, and economic turmoil.

Yet, instead of discussing the devastating post-pandemic global economic revival and recovery, the world body is faced with the crisis of one of its founding members, Russia, armed with a veto, threatening to unleash nuclear disaster on Ukraine, another smaller member nation of the United Nations.

The frustration and ineffectiveness of the UNO was reflected in the inaugural address that the UN Secretary General, Antonio Guterres, delivered at the UNGA when he lamented that, “our world is in peril and paralyzed by political divides that were undermining the work of the UN Security Council, international law, trust and people’s faith in democratic institutions, and all forms of international cooperation”.

India, whose two-year tenure as a non-permanent member of the UN Security Council ends this December, has been increasingly critical and vocal against its old close friend and defence partner, Russia, with Prime Minister Narendra Modi clearly telling Russia’s President Vladimir Putin, “Today’s era isn’t of war.” In Samarkand, at the summit of the Shanghai Cooperation Organisation countries last week, Modi urged Putin to “talk about how can we progress on the path of peace.”

External Affairs Minister Subrahmanyam Jaishankar, who is leading India’s delegation to the UNGA this year, also reiterated the need for an “immediate cessation of all hostilities” and a return to the negotiating table. Speaking at a special session of the UNSC on the Ukraine war, Jaishankar said the trajectory of the Ukraine conflict is “a matter of profound concern for the entire international community and the world has experienced its consequences in terms of higher costs and shortages of foodgrains and fertilizers and fuel.”

Despite an assurance to the Indian PM last week that he wanted an end to the war in Ukraine “as soon as possible,” setbacks on the battlefield in Ukraine has seen Putin call for a mobilisation of reserve armed forces in Russia and a threat to unleash nuclear weapons if Russia’s sovereignty was threatened. “This is not a bluff,” Putin said, to international outrage. He doesn’t care or speak about the sovereignty of Ukraine, which he has violated.

Also speaking at the UNGA, US President Jo Biden echoed much of the global community when he unequivocally condemned the ”brutal, needless” Russian war in Ukraine saying, “This was is about extinguishing Ukraine’s right to exist.” “If nations can pursue their imperial ambitions without consequences, the post- World War II order crumbles,” he said, strongly condemning Putin’s “irresponsible nuclear threats.” Russia’s “imperial” invasion of Ukraine has “shamelessly violated” the UN charter. Putin, he said, had recklessly disregarded the responsibilities of the non-proliferation regime with his overt threats of a nuclear call to arms.

The post-World War II order is what the UN is meant to symbolise, with countries together confronting the globe’s common challenges. That is what the war in Ukraine has most brazenly challenged, threatening the very survival of the UNO. Every single nation has backed calls for reform of the UNO, but how does one reform a system which confers unequal privileges on five countries, because they were victors in a global conflict which ended 77 years ago?

The UNO has been unable to agree on a comprehensive definition of the term ‘terrorism’ and, consequently, unable to adopt India’s Comprehensive Convention against International Terrorism (CCIT) filed at the UN in 1996.

Expansion of the UNSC, without veto powers for new entrants, which is what has been offered to India, is a meaningless exercise if countries which need to exercise maximum restraint in violating international rules and conventions are themselves reckless and solely uphold their own interests. There is no agreement even on the term terrorism, with veto wielding nations like China declining to designate known and convicted terrorists entirely for political purposes. – INDIA NEWS STREAM.

The author is a senior journalist. The views expressed in the article are author’s own.