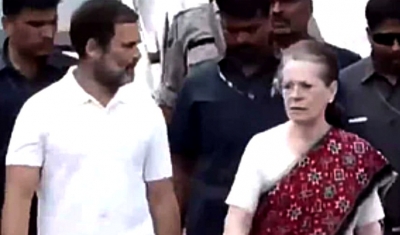 In one such attack, the Congress leader claimed that thousands of crores are being spent on news media outlets and other communication platforms to project him wrong for everything.

Rahul Gandhi, who is no stranger to unfortunate media attention, held a press conference in Tumakuru district of Karnataka wherein he underscored the reasons for the “wrong projection.” “I always stand for certain ideals. That of course disturbs the BJP, RSS and other forces,” he said.

He categorically said, as reported by the IANS, “Thousands of crores of media money or media energy has been spent in trying to shape me in a way which is just untruthful and wrong.” He further explained, “That machine is going to continue. It is a well-oiled, financially rich machine. My truth is different. It is always different and people who care to look carefully will see what I stand for and what I work for.”

The nexus has often been under scrutiny by several media watchdog bodies ever since the ascendance of Narendra Modi on the national political horizon, resultantly leading to incessant decline of India’s ranking in World Press Freedom Index (WPFI) and other indices of press watchdog bodies. Notably, this year, India’s rank has further slipped to 150 out of 180 in the WPFI which is below neighbouring Pakistan, Sri Lanka and Myanmar.

The Congress spelt out three fundamental issues that prompted it to take out the 3,570-km yatra from Kanyakumari to Kashmir march. The IANS reported: “First being the violence, the hatred BJP and RSS are spreading, the division of the country they are carrying out. The second issue is the massive concentration of wealth they allow to happen.”

Even as Rahul Gandhi’s critics, of late, noted that the Gandhi scion is drawing people’s attention during his ongoing Bharat Jodo Yatra, the coverage in the national exposed “spectacular incompetence and arrogance” of the fourth estate. Noted columnist Vir Sanghvi in an article writes, “Bharat Jodo Yatra has shown Indians the real Rahul Gandhi, a leader who walks among his people, and not the caricature created by BJP and TV news media.” He underscores: “It’s time to give credit where credit is due. No matter what you think of Rahul Gandhi’s record as Congress president and later as president-by-stealth, it is hard to deny what a stupendous achievement his Bharat Jodo Yatra is.”