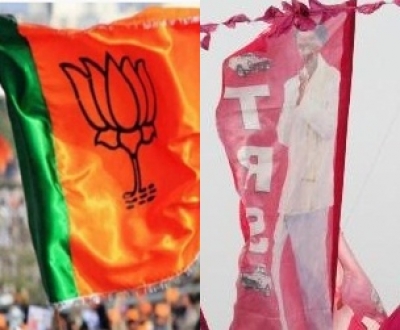 Hyderabad, Aug 5: Mild tension prevailed in Huzurabad town on Friday as activists of the ruling TRS and BJP clashed after a TRS leader dared MLA Eatala Rajender for an open debate.

BJP activists tried to rush towards the open debate dais arranged in the town for the open debate challenge made by Member of Legislative Council (MLC) Padi Koushik Reddy belonging to the Telangana Rashtra Samithi (TRS).

The MLC had invited local MLA Rajender of the BJP for a debate on the development of the Huzurabad constituency. He had challenged Rajender to reach Ambedkar Chowk in the town at 11 a.m. The TRS leader waited there for half-an-hour but the MLA did not turn up.

Addressing his supporters, Koushik Reddy slammed Rajender for failing to accept his challenge for the debate. He said no development works were taken up in the constituency after Rajender won the by-election. “By not turning up for debate, Rajender has accepted that the constituency witnessed development only under TRS rule,” he said.

When Koushik Reddy concluded his speech, some of the BJP workers rushed to Ambedkar Chowk and burnt the effigy of Koushik Reddy. This led to a clash between workers of both the parties.

They threw slippers and party flags at each other. Police intervened to defuse the situation by dispersing both the groups with the use of mild force. Some BJP workers were detained by the police.

For a second consecutive day, the town witnessed clashes between workers of both the parties. They had clashed on Thursday following a dispute over the erection of flexi banners.

The challenges and counter challenges between the leaders of the TRS and the BJP in recent days have once again generated political heat in the constituency.

Rajender had resigned from the TRS and as MLA from Huzurabad last year after he was dropped from the state Cabinet by Chief Minister K. Chandrasekhar Rao following allegations that he encroached on land belonging to some farmers.

Rajender later joined the BJP and won the by-elections held in November last year. He had defeated his nearest rival Gellu Srinivas Yadav of the TRS by a margin of over 23,000 votes.