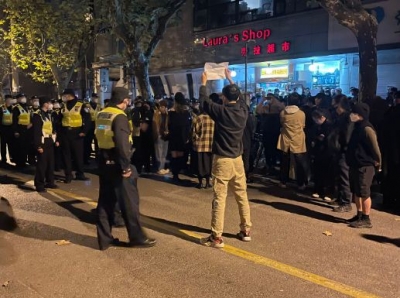 According to a China-focused data analyst, “search for Beijing/Shanghai/other cities in Chinese on Twitter and you’ll mostly see ads for escorts/porn/gambling, drowning out legitimate search results”.

The analyst said in a Twitter thread that there has been a “significant” uptick in these spam tweets over the last three days, as a wave of protests erupted across major Chinese cities.

“These are just a small sample of the search results — go and search Shanghai and you’ll see new spam tweets come up every few seconds. So the number of spam accounts is way larger than a few hundred,” the data analyst posted.

Twitter “was aware” of the spam issue and “was working to resolve it.”

Chinese President Xi Jinping on Monday faced unprecedented dissent after thousands of demonstrators protested in cities across the country over the weekend against his zero-Covid strategy, with some daring to openly call for his removal in the streets.

“Step down, Xi Jinping! Step down, Communist Party,” some protesters yelled among hundreds who gathered in the financial hub Shanghai, one of multiple major cities where protests broke out following a deadly fire on November 24 at an apartment block in the far western region of Xinjiang, reports CNN.

The fire appeared to act as a catalyst for searing public anger over China’s strict zero-Covid measures after videos emerged that seemed to suggest lockdown measures delayed firefighters from reaching the victims.

In many parts of the country, residents in locked-down neighbourhoods tore down barriers and took to the streets, following mass anti-lockdown protests that swept Urumqi on Friday night.