Rahul’s security to be tightened in J&K, Punjab leg of Bharat Jodo Yatra 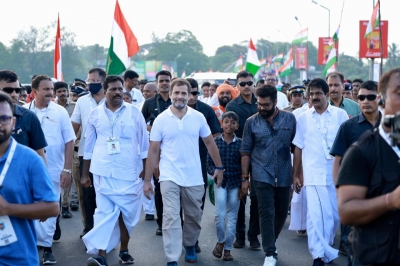 New Delhi: Security agencies have made elaborate preparations to tighten Rahul Gandhi’s security during Bharat Jodo Yatra, which will enter Punjab and Jammu and Kashmir, this month.

According to sources, the Central Reserve Police Force (CRPF) has reviewed the security arrangements since both the areas are sensitive.

The security agencies are engaged in the process of deploying forces and are coordinating with the local police.

According to information, the Central agencies have sought information of the yatra’s route from the local police.

The security agencies have been alerted about the recent incidents in Punjab and J&K. They have conducted recce in all the locations of the route as well.

According to sources, Gandhi is a Z plus protectee, which is why the security arrangements are being made on the same level.

Gandhi’s security has been reviewed based on the threat perception report by Intelligence Bureau (IB).

Significantly, the Congress wrote a letter to the MHA in December, and raised the demand for Gandhi’s security arrangements.

In response, the CRPF had said that the security rules were violated by Gandhi himself.

The yatra began on September 7 and is expected to end in J&K on January 30. – IANS