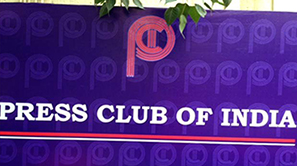 The Press Club of India has condemned the way five journalists were attacked during the Hindu Mahapanchayat meeting held on April 3 at Delhi’s Burari Grounds as highly deplorable.

“It seemingly smacks of pre-conceived nefarious designs of communal hooligans to force mediapersons to follow their hidden agenda. Going by the series of attacks on media persons in the recent past, it could be inferred that these people are hell bent on gagging the press in its entirety,” PCU said in a statement.

“It is also sad on the part of Delhi Police that it remained mute spectator and didn’t arrest the culprits involved in the Burari attack.”

On the face of it, Press Club of India demands immediate arrest of these hooligans with communal overtones and judicial enquiry be initiated to unearth sequence of events leading to barbaric assault on mediapersons.

It is highly condemnable on the part of Ballia district administration to arbitrarily arrest those Ballia-based journalists who had exposed the leak of 12th examination English paper. It is just akin to a case of kettle calling the pot black.

“Of late, it has been observed that UP government is going hammer and tongs to threaten and actually arrest those mediapersons who don’t toe the line of government thinking over the issues of policy measures. And sycophant and more-than-eager UP police and bureaucrats don’t waste time to arrest mediapersons at first-available opportunity to please Powers-that-be,” PCI said.