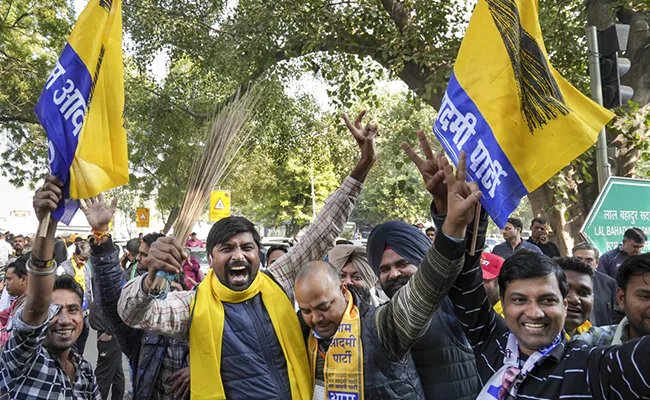 New Delhi: The AAP managed a prestige win by dislodging the 15-year-old BJP’s rule in the municipal corporation of Delhi even as the saffron party did not fare as badly as was predicted.
The Arvind Kejriwal-led AAP has unseated the BJP, winning 134 seats, eight above the majority in a House of 250. The BJP has won 104 and Congress reduced to nine.
Early analysis show that AAP victory was not so much due to the bad performance of the BJP mainly due to consolidation of anti-BJP votes which directly went to Arvind Kejriwal’s party. Earlier, anti-BJP votes would distribute among Congress, Samajwadi Party (SP) and Bahujan Samajwadi Party (BSP) and others. In short consolidation of anti-BJP votes helped the AAP. The Congress, as assumed, stood distant third winning wards mostly dominated by Muslims. If compared with assembly elections, AAP has come down to 42.3 per cent vote share from 53.8 per cent in the assembly elections 2020.
However, issues cleanliness, health, sanitation, condition of schools run by civic bodies might have factored in. Besides, the AAP has managed to set agenda on schools, health and cleanliness.
The key message is that the political parties cannot afford to take voters for granted. If AAP took Muslim voters for granted, the BJP ignored the middle class whose votes floated to Arvind Kejriwal’s party. However, the AAP for the first time it has unseated the BJP in any election.
AAP kept its pitch on the garbage issue: “We’ve improved things under the state, now let us take care of sanitation too.” Perhaps it worked as it snatched several wards from BJP.
The BJP, which ran the campaign with PM Narendra Modi’s face, has won 104 — a not-so-bad performance after 15 years of continuous rule – but certainly a setback for the saffron party which recklessly invested all its resources.
On the other hand, the few pockets of influence Congress had too slipped away from its hand. The party had won overall 30 seats and had a vote share of around 21%. It has ended up with 11.68% votes this time. The grand old party managed to win seats mostly dominated by Muslims. The party has continued to focus on “macro-political ideology” with its top leaders countering the “communal and anti-democratic policies” of the Narendra Modi government.
BJP vote share increased
It is not apt to nudge Modi’s popularity as the BJP managed to increase its vote share compared to the previous municipal polls. In 2017, the BJP secured around 37 percent of the total votes. This time the vote share of the saffron party has actually increased to about 39 percent, a rise of 2 percentage points. It is certainly laudable that despite 15-years-of rule in the civic body, the party’s votes did not decrease. The BJP has called for a meeting of its key office bearers at the party headquarters on Wednesday evening to discuss its defeat.
This was the first time that civic elections were held in the national capital since the North Delhi Municipal Corporation, South Delhi Municipal Corporation and East Delhi Municipal Corporation were merged in May. Then, The BJP had bagged 181 of the total 272 wards, while AAP could manage only 48, leaving the Congress to content with 30 seats.
Aam Aadmi Party leader and Punjab Chief Minister Bhagwant Mann, says Arvind Kejriwal first uprooted the 15-year-long rule of the Congress in New Delhi and now he has done the same to the BJP in MCD, reports ANI. “It shows people of Delhi don’t like politics of hatred, they vote for schools, hospitals, electricity, cleanliness and infrastructure,” Mann says.
-INDIA NEWS STREAM
Share

BJP leads in Gujarat, tough fight with Congress in Himachal