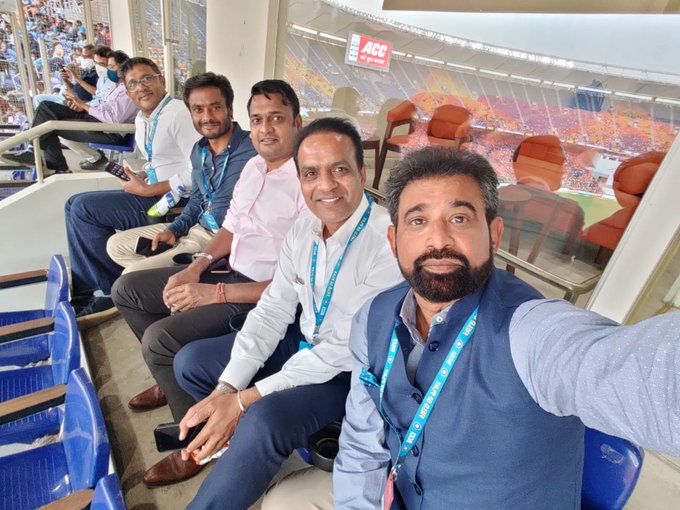 New Delhi: Ajay Ratra, Maninder Singh, Shiv Sunder Das, and Nayan Mongia are a few of the contenders for the position of senior men’s selection committee member on the BCCI.

The application period ended on Monday (November 28), and the BCCI will now probably create a Cricket Advisory Committee (CAC) to examine candidates before making a choice. The new selection panel’s first task will be to choose the Indian team for the limited-overs series against Sri Lanka at home in 2023.

Das is employed as a batting coach for Punjab at the moment. He had previously worked as a coach at the National Cricket Academy (NCA) and with the Indian women’s squad. If Das is chosen — as many of his peers think — he will succeed Debasis Mohanty, an ex-teammate from Das’ former team, Odisha.

Badani, on the other hand, is now the fielding coach for Sunrisers Hyderabad in the Indian Premier League (IPL) and previously served as the head coach of the Chepauk Super Gillies in the Tamil Nadu Premier League (TNPL), where they won three consecutive championships (the 2022 title was shared).

The outgoing selection committee, led by former Indian pacer Chetan Sharma can again put in their application for the senior selectors, as all of them were appointed in 2020 or 2021. However, all of them will have to go through the process of interviews before the CAC. Only West Zone candidate Abey Kuruvilla, the fifth man in the selection panel, completed his term earlier, and no one has replaced him since in the panel.

Whether or not they have reapplied is something that cricket fans would only come to know once BCCI will disclose all the names.

Along with Chetan, Harvinder Singh (Central Zone), Sunil Joshi (South Zone), and Debasish Mohanty (East Zone) were part of the old selection committee. But it was on November 18 that BCCI decided to have new selectors on board.

It came a week after Team India’s 10-wicket mauling at the hands of England on November 10. Even before that, the warning signs were piling up against South Africa. The famed Indian batting line-up had a rare off-day, scoring less than seven runs per over to finish at 133 for nine wickets in 20 overs. Though the match was decided in the last over, the Indian bowlers just did not seem menacing enough to stop South Africa.

And not to forget the opener against Pakistan, which Team India only managed to win because Pakistan failed to keep its composure at the end of the game.

It is no secret that former India speedster Chetan Sharma, who became famous or infamous after Pakistani cricketer Javed Miandad smashed him for a last-ball six to lead Pakistan to victory in the Asia Cup final in Sharjah in 1986, was appointed as selection committee chief in 2020 due to his close association with the ruling party, BJP.

For this precise reason, everyone was convinced that Chetan would have few problems and would obey the directives from the top without raising any fuss, much like the party high command, as BCCI is being led by none other than Union Home Minister Amit Shah’s son Jay Shah.

It is worth noting that Chetan, who was the convener of the BJP Sports Cell before becoming chief selector, was running for legislative assembly (MLA) ticket from Kalka or Faridabad. Before that, he contested Lok Sabha elections from Faridabad on a Bahujan Samaj Party (BSP) ticket in 2009. He finished third, securing 1.14 lakh votes. He later quit the BSP and joined the BJP the same year, in 2009.

Coming back to cricketing turf, no one in the BCCI had the slightest idea that he would face the toughest opposition from none other than Team India chief coach, Rahul Dravid. Chetan and company had a difficult time convincing Dravid and other members of the team management committee of their choice of players.

The biggest squabble occurred when Dravid chose to play Dinesh Karthik over Team India’s X-factor Rishabh Pant. Having won matches in England and Australia single-handedly at the age of just 23, Pant became a household name during the last two seasons. But Dravid, or for that matter, skipper Rohit Sharma, opted to go in with the experienced Karthik in the key T20 WC games for reasons only they can explain.

It is learnt that as per the team management “Pant lacks fitness”, and that’s how Karthik got the chance in playing XI. But there are no takers within the BCCI to accept such an excuse. “Once a player proves his worth as a big match-winner at the highest level, it is the duty of team management to ensure that proper attention is being paid to such talent by the training staff,” was explained by the source.

Another sticking issue was the omission of right-arm leg-spinner Yuzvendra Chahal from the starting line-up in favour of Ravichandran Ashwin. As England’s opening duo of Jos Buttler and Alex Hales dominated the game, the bowling unit underwhelmed after setting a target of 169 against England in Adelaide.

There was no bowler in the squad who looked like troubling the English opening pair. The Indian team excluded Chahal from the playing XI throughout the tournament despite him being their key wicket-taker before the start. The move raised many eyebrows as the team management had consistently put faith in Chahal during the last two seasons. On the other hand, Ashwin was preferred in Tests but was not given a chance in white-ball cricket during the same time.

“Not playing Yuzi (Chahal) was a big mistake again. He has played T20 cricket around the world. Look at Adil Rashid or even part-time English spinner Liam Livingstone, who made such a big impact during the T20 World Cup. Whoever chose to pick Ashwin over Yuzi made a big mistake,” explained the source.

Over the past few months, the selection committee has come under fire for its contentious and questionable decisions, which finally led to India’s elimination from the T20 WC.

One of the main reasons was that “Chetan was not decisive or forceful while making decisions”.

During his tenure, there was no settled squad and too many experiments were carried out with the Team India squad. The selection panel appointed eight international skippers in one year in the name of managing the workload. This turned out to be a joke within the team circles after KL Rahul was picked for T20 cricket after a gap of almost eight months,” said the source.

The results were in front of everyone, as Team India lost two World Cup games by 10 wickets, the first against Pakistan during the 2021 T20 WC, something that had never happened in Indian cricket before. Also, there were allegations against the selection panel that “both domestic and IPL performers were ignored while picking squads for both the T20 World Cups”.

The insider’s opinion is that the BCCI wants to name a separate head coach and captain for T20. Dravid would then be limited to playing in Test and One-day cricket only.

When asked if there was any truth to the claims that former India captain Mahendra Singh Dhoni, whose team Chennai Super Kings was closely examined during the 2013 spot-fixing scandal, had some truth to them, the source responded: “According to the current BCCI hiring guidelines, only those former players who have been retired for at least five years can apply. Therefore, such a possibility is impossible.”