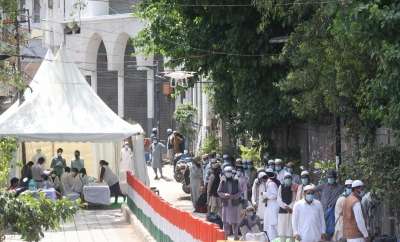 New Delhi: The Delhi High Court on Friday sought the Centre’s clear stand on the reopening of the entire masjid premises in Nizamuddin Markaz for offering, asking why can’t the religious place be opened fully.

A bench of Justice Manoj Kumar Ohri was dealing with the Waqf Noard’s plea for reopening of the religious place considering recent guidelines issued by the Delhi Disaster Management Authority (DDMA).

The board was approaching the court for the reopening of the premises in view of the festival of Shab-e-Barat and the coming month of Ramzaan for religious purposes.

Markaz has remained shut since March 3, 2020, following a spurt in Covid positive cases on the premises.

Advocate Rajat Nair, appearing on behalf of the Centre, in the last hearing, had said that the offering of ‘namaz’ by five people was allowed earlier, and can be done this year also in the religious festival.

During the course of hearing on Friday, the bench asked: “Mr Nair, you please seek instructions as to in case there is no objection to opening of first floor, what objection may be there for opening of remaining portion, de hors your submission that you have no objection as far as religious festivals are concerned. Why not for everyday?”

As the counsel reiterated the earlier stand, the Court listed the matter for March 14 for a clarification from the Centre in the matter.

Petitioner’s counsel argued that there was no reason as to why any restriction should be placed and the mosque premises should not be opened. (IANS)