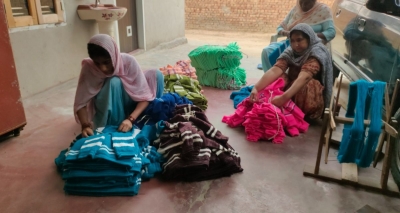 Barnala: It wasnt easy for Gurmeet Kaur, a Dalit Sikh from Punjab, to smash the long legacy of caste-based discrimination. The 55-year-old, like many other Dalit women, worked at the homes and farms of upper caste ‘Jat Sikhs.

But, in 2016, Gurmeet realised that this work was not her only destiny. Along with several other Dalit women of Sukhpura Mour village in Barnala district, she was able to break free from the shackles of caste vocations through knitting.

This knitting group in Sukhpura Mour comprises 18 women. Clothing companies in Ludhiana — a major hub of hosiery — place orders for sweaters with this group and provide them with wool. They are paid per sweater. The women divide work amongst themselves based on the availability of knitting machines.

At present, only seven women in the village of nearly 2400 have knitting machines while the rest sew the woolens. Women owning a machine get Rs 50 to Rs 60 per completed sweater. The ones without a machine help out in sewing the knitted pieces. They are paid Rs 15 to Rs 20 per piece.

While the women work within a framework of mutual understanding, they are not organised or registered as an SHG. A self-help group is eligible for many services from banks, including loans on low-interest rates. The group in the village instead easily avails loans from local money lenders and are able to repay them on time due to ample orders.

The group was founded by Saravpreet Kaur 15 years ago. A non-Dalit, she was married off at the age of 19 and witnessed extreme poverty. To make ends meet, the young woman decided to start a knitting business. With the help of her parents, she was able to procure a knitting machine by availing a loan of Rs 12,000 from a village moneylender.

Later, Saravpreet purchased another machine with her own money. Soon more women from marginalised backgrounds joined in. Today 13 out of 18 members in the group are Dalits. However, the women claim that there have been no tensions due to the caste composition of the group. The women in the village have almost forgotten their caste division and work together to earn a living.

When the group started 15 years ago, the women used to only knit sweaters for locals. Soon they came to know that the hosiery units from Ludhiana outsource work. These women then reached out to some of the units in Ludhiana and were initially given a small order, which they completed in time. Now they don’t require any marketing as they are directly connected with the factories in Ludhiana and get orders regularly.

Every few months, the women with machines visit units in Ludhiana, 70 km away, accompanied by their male relatives. They deliver the finished goods and are allotted a fresh quota of wool for new orders. The business thrives through the year, as big brands continue giving orders even during summers so that finished products can be stocked for winters.

Vandana Sharma, a senior fashion designer at Arora Knitfab, Ludhiana told 101Reporters that many units, plagued by labour issues, outsource this work to local women in different parts of Punjab. “This benefits both the manufacturing units as well as these women who are able to earn a living. This process also helps in empowering women financially,” added Sharma.

Sharma’s belief resonates with Gurmeet who, as a former domestic worker, earned Rs 2,500 per month. “My husband was a daily wager who used to earn nearly Rs 5,000. However, three years ago, he had to leave work due to his old age. Health issues, including my knee problems, further drained us, and I got a sewing job from two women who own knitting machines in our village,” said Gurmeet. Though she still cannot walk properly due to her bad knee, she now earns nearly Rs 8,000 per month.

Some women have also purchased knitting machines, costing almost Rs 25,000, through micro-financing companies operating in the area. During the pandemic and the subsequent lockdowns, payment of these loans became a significant hurdle. There were very few orders from hosiery companies in Ludhiana.

Another member, Rani Kaur, 50, a Dalit woman from neighbouring Kothe Nimwale village, told 101Reporters that she purchased the knitting machine for Rs 22,000 two years ago. Like thousands of other Dalits in Punjab, she was an agricultural labourer before starting her own business. “I used to earn Rs 5,000 per month by working for nearly 10 hours on the landlord’s field. However, I now earn around Rs 18,000 on an average in a month. I also have two helpers who sew the knitted clothes. I pay them Rs 18 per piece,” said Rani.

During the lockdown, Rani said that she struggled to pay the loan she had taken from a local money lender for the knitting machine as there was no work and no income. “But, I somehow managed to surviv that period,” she added.

The pandemic has worsened the financial insecurities amongst Dalits, who comprise 32 per cent of the population in Punjab — the highest in any state. Dalit women, especially in the Malwa region of Punjab, where both Rani and Gurmeet live, have faced excessive discrimination for years. NGOs and organisations working for Dalit women have claimed that harassment at work is common for these women.

Meanwhile, an upper-caste Sikh, Saravpreet Kaur, believes that awareness and empowerment through work can end discrimination to a large extent. “We work as a group with no caste-based stratification. There are women, including Dalits, who own machines, and others who sew the parts of the clothing. Both go hand in hand, and one is incomplete without the other,” she said.

The group plans to buy more machines in the coming months and provide employment to others in the surrounding villages. “Getting a loan is easy. It is more difficult is to convince Dalit women that their life is beyond the fields and homes of landlords. Once they understand this, there would be no dearth of work and money for Dalit families,” said Rani Kaur. – IANS