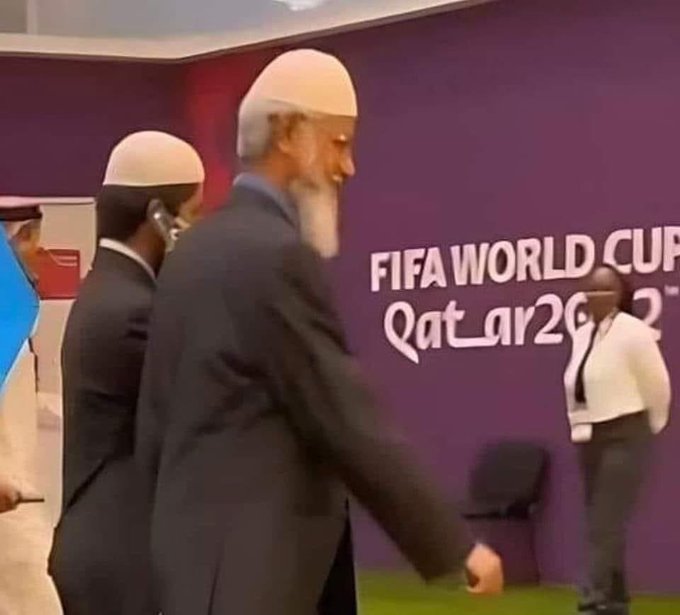 Qatar: Zakir Naik, who is accused of  money laundering and hate speech in India, will deliver religious lectures during the 2022 FIFA World Cup  tournament, according to social media posts.

The controversial Islamic preacher has already arrived in Qatar.  A Video of Zakir Naik  entering the FIFA world cup venue has gone viral on social media.

“Preacher Sheikh Zakir Naik is present in Qatar during the World Cup and will give many religious lectures throughout the tournament,” Faisal Alhajri, a presenter at the Qatari state-owned sports channel Alkass, wrote on Twitter on Saturday.

Naik’s Islamic Research Foundation (IRF)  was outlawed by India late in 2016 on the grounds that he had encouraged and assisted the group’s members spreading hatred or other negative sentiments among various religious communities and groups.  The Islamic preacher relocated to Malaysia after leaving India.

A report in the Mint quoted filmmaker Zain Khan’s Twitter post in which he said.“One of the most popular Islamic Scholars of our time Dr Zakir Naik has reached #Qatar for the #FIFAWorldCup.”  Other verified Twitter accounts have also confirmed Naik’s presence in Qatar as an invited dignitary, the Mint said.

Shanghai: Hundreds of demonstrators and police have clashed in Shanghai as protests over Chinas stringent Covid restrictions continued for a third day and spread to several cities, in the biggest...

Ramallah:  Palestinian Prime Minister Mohammed Ishtaye has accused Israel of seizing two-thirds of the Palestinian groundwater and diverting it into its cities and settlements. He made the remarks at a...

London: British Prime Minister, Rishi Sunak's reported plan to restrict foreign students to premier universities in the UK could meet resistance from his chancellor of the exchequer, Jeremy Hunt. Hunt...

New Delhi: The Haryana government's bond policy has evoked all-round criticism from the MBBS students and hundreds of undergraduates medical students are protesting against this since last 26 days. The policy...

New Delhi: The analysis of affidavits of candidates contesting the Municipal Corporation of Delhi (MCD) polls this year showed that major political parties have relied more on women candidates this...

26/11 a blurry memory, but Gen Z ‘safer, secure’ in a more confident India

Ghosts of polarization haunts ‘secular circles’; Owaisi hits back at Shah for ‘teach a lesson’ remarks

‘The lesson you taught in 2002 was that Bilkis Bano’s rapists will be freed by you, you'll free the murderers of Bilkis’ 3-year-old daughter, Ahsan Jafri will be killed’ ‘A...

Protests in Tenkasi, TN as waste dumping from Kerala continue

Chennai: Protests are growing in Tenkasi in Tamil Nadu as Kerala continues to dump waste -- both electronic and biomedical -- into the Naranapuram village in the district. It is...