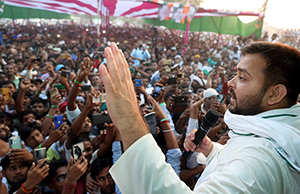 Bihar agriculture minister Sudhakar Singh, who flagged the issue of corruption in his own department yesterday, has resigned, his father and Rashtriya Janata Dal Bihar president Jagdanand Singh said on Sunday.

A first-time MLA from Ramgarh in Kaimur district on Saturday said he would not allow the “continuation of BJP agenda” in his department with the formation of the Grand Alliance government in the state.

Pointing out that he will not rest till the Agriculture Produce Marketing Committee (APMC) Act and ‘mandi’ system are restored, Singh said the decision of scrapping them in 2006 was “anti-farmer” in nature, reported PTI.

The Nitish Kumar government in Bihar had repealed the APMC Act and ‘mandi’ (wholesale markets for agricultural produce) in 2006 during NDA rule in the state.

The RJ leader submitted his resignation to Deputy CM Tejashwi Yadav. He was in constant controversy with his statements. A few days ago, he had also raised questions on Nitish Kumar’s agriculture road map.

“Scrapping the APMC Act and ‘mandi’ in 2006 was a decision that was anti-farmer in nature. The ‘Mahagathbandhan’ government in the state should work to fulfill the promises made by our alliance partners to the electorate,” the PTI quoted him as saying. Singh recently stirred up a controversy when he said that all his department officials are “thieves and thereby being head of the department he is head of the thieves”.

He further reported to have said: “I have sought an appointment with the Union Agriculture Minister Narendra Singh Tomar and Union Minister of Chemicals and Fertilizers Mansukh Mandaviya to apprise them about the need for the restoration of these two laws in the country, especially in Bihar.”

The MLA from Ramgarh said that the Seed Corporation does fake farming. “No farmer takes seeds from there,” he said. The seed of two and a half-two hundred crore rupees is eaten by the corporation itself.

“If you keep burning effigies, we will feel that the farmers are angry. I say that you also come out on the streets. When we speak, it seems that I am talking personally,” he reportedly said at a function in the state capital.