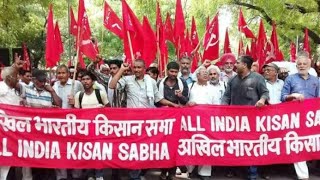 Apple farmers in Kashmir are being exploited by the corporates and middlemen with the active support of the government of India through the neoliberal policies, the All India Kisan Sabha (AIKS) stated they will vow to form a Apple Farmers Federation of India and small cooperatives that will not invisible local producers especially from Himachal, Kashmir and Uttarakhand.

On June 23, members of All India Kisan Sabha and P Sundarayya Memorial Trust admitted during a two-day national workshop of apple farmers in Srinagar that despite the apple industry contributing 77% of the total produce in the country, the industry is denied a “remunerative price”. “Around 30% of the production gets damaged at different stages due to non-availability of storage facilities with small and middle farmers,” the members of AIKS said.

The AIKS have decided to submit a charter of demands to the Union Government and undertake struggles till realization of the demands which include declaration of Rs 2,500 crore package to enhance per hectare productivity of apples.

Apple constitutes 8 percent of GDP of Jammu and Kashmir, it provides livelihood to around 9 lakh households in India, mainly from Kashmir, Himachal Pradesh and Uttarakhand. Around 24 lakh Metric tons of Apple is produced by India as per the local estimates.

“We have decided to form an 11 member committee of apple growers from J&K, Himachal Pradesh and Uttarakhand who will take up the day-to-day issues of the farmers on ground,” said Hanan Mollah, general secretary of AIKS.

“Out of the total Rs 14400 crore value of apple in the market only Rs 4300 crore reaches to the actual grower and more than Rs 10,000 crore is taken by the corporates, businessmen and middlemen. This has to be changed and formation of small cooperatives can help us to counter this,” the largest farmers movement stressed.

Responding to the apprehension raised by the apple growers which incurred heavy losses due to cheap imports. The former legislator, Communist Party of India (M) leader Yousuf Tarigami claimed the present government led by PM Modi is more worried about corporate giants like Adani. Farmers fear that the authorities have given free access to manipulate the sales of the farmers. Like how the Controlled Atmosphere Storage facility was rented out to Agri-fresh headed by the Adani group, AIKS has termed it another exercise of diverting the public money to assist the corporate houses for naked profiteering.

“Growers are suffering and nobody cares about them. Even pesticides are ruining our crops. I suggest that the government should establish a laboratory in every block to ensure the quality of pesticides,” Tarigami said. – INDIA NEWS STREAM