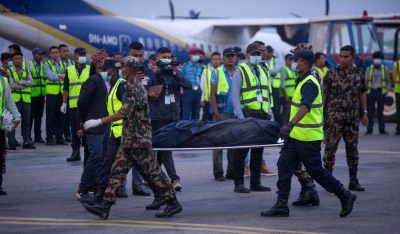 Kathmandu: The bodies of all the 22 people, including four Indians, who died in a plane crash in Nepal have been accounted for after the last one was found on Tuesday, the army said.

“Last dead body has been recovered. Arranging to bring remaining 12 dead bodies from crash site to Kathmandu,” Brigadier General Narayan Silwal, spokesman of the Nepal Army, said in a tweet.

The Nepal Army found the crash site in a remote hilly area in Mustang district, where Jomson is located, on Monday morning with 21 bodies recovered and 10 airlifted to Kathmandu.

A preliminary study has revealed that bad weather conditions caused the plane to crash.

But the details will be probed by a five-member investigation team, Deo Chandra Lal Karn, spokesman of the Civil Aviation Authority of Nepal, told Xinhua.

The Indian nationals identified as Vaibhavi Banderkar, Ashok Kumar Tripathy, Dhanush Tripathy and Ritika Tripathy are believed to be from Pune. Likewise, seven members of a Nepalese family were also killed in the crash.

According to the Nepal Army, the bodies were scattered over a 100-metre radius from the main impact point.

The search for the plane began shortly after it lost contact on Sunday morning. But it could not be traced.

It takes 20 minutes to reach Jomsom from Pokhara. But within 12 minutes of taking off, the aircraft lost contact. (IANS)

Seven killed in ambulance mishap in UP