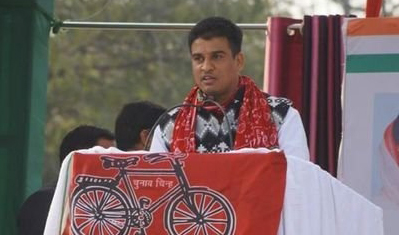 Kanpur (Uttar Pradesh) : The absconding Samajwadi Party MLA Irfan Solanki has been booked for boarding a New Delhi to Mumbai flight on a forged Aadhaar card on November 11.

The MLA and his brother Rizwan were already wanted by the Kanpur police for allegedly setting a woman’s house on fire to grab her 365 square yard plot in Jajmau’s Defence Colony.

Anand Prakash Tiwari, joint commissioner of police (law and order) said that a senior woman SP leader Noori Shauqat and three others, who allegedly helped Solanki obtain the Aadhaar card, have been arrested.

The three others were Ashraf Ali, Anwar Mansoori and Akhtar Mansoori.

Two more people named Ishrat Ali and Ammar Ilahi were yet to be arrested, said Tiwari.

The MLA flew from Delhi to Mumbai using this forged identity card to evade arrest. The Aadhaar card carried his photograph but had his name mentioned as Ashraf Ali, the officer said.

Tiwari said the fresh FIR was lodged with the Gwaltoli police.

Several police teams were conducting raids in several cities for the arrest of the MLA. While on his trail, the police team found that Solanki had gone to Mumbai from New Delhi.

The police obtained CCTV footage of airport terminals in the two cities that confirmed Solanki’s entry and exit after the said flight landed, said the JCP.

The footage also purportedly showed that some people had come to the airport to receive the MLA. “All these people knew that Solanki was wanted in a criminal offence and that he was travelling on forged documents. They have also been made an accused,” he added.

The FIR came ahead of the hearing on Solanki’s anticipatory bail plea in a district court.

His lawyer, Naresh Chandra Tripathi, alleged that the MLA was being framed.