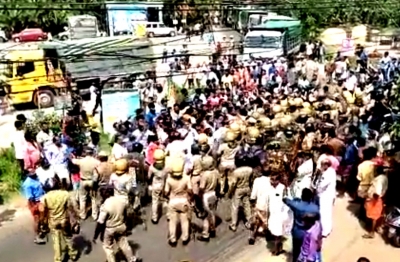 Thiruvananthapuram: The Kerala Police have registered an FIR on the Vizhinjam clashes and the Archbishop of the Latin Catholic Diocese, Thomas J. Netto has been named as the first accused.

More than 50 priests of the Latin Catholic church, including the Auxiliary bishop Christudas and Vicar General, Yujin Pereria were charged in the FIR. The police mentioned that the priests, including the Bishop, conspired for the attack at Vizhinjam port on Saturday.

Those opposed to the Vizhinjam port of Adani group led by the Latin Catholic church of Thiruvananthapuram had attacked the trucks that were bringing stones to the port site and the glasses of many trucks were shattered on Saturday. The protesters also prevented the trucks from reaching the site by blocking the movement.

A group of local people, who were in support of the Vizhinjam port, tried to intervene to allow the trucks to pass. But, they were stopped by the protesters which led to major clashes between the two groups. Those supporting the Vizhinjam port had the backing of the CPI(M), BJP and the SNDP, the powerful backward-class organisation of the Ezhava community.

In the clash, several people from both sides were injured and the police pegged the loss of properties at Rs 2 lakh. The police also mentioned that the losses should be retrieved from the Bishop and other priests who were charged in the FIR.

The Vicar General of the Latin Catholic Church, Father Yujin Pereria while speaking to the mediapersons said, “We will approach the High court of Kerala for justice and we will be submitting our prayer in the court on Monday.”