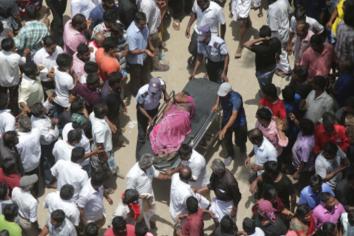 Chennai: Two persons were killed and 35 suffered minor injuries on Wednesday in a stampede outside the Rajaji Hall here as hundreds of thousands thronged for a final glimpse of DMK leader M. Karunanidhi, a hospital official said.

A senior official of the Rajiv Gandhi Government General Hospital told IANS: “Two persons were brought dead to the hospital with injuries arising due to trampling. One is a woman, Shanbagam, while the other person is an unidentified male.”

The dead woman was said to be 60 years old.

The official added that another 35 persons were brought to the hospital with minor injuries. Some were dehydrated. They were given treatment.

“There has been heavy jostling and pushing and pulling in the crowd since morning,” one man at the site said, explaining what led to the stampede.

The tragedy occurred shortly after DMK leader and Karunanidhi’s son M.K. Stalin appealed for calm to the milling crowds which were getting restive at not being able to get close to the former Tamil Nadu Chief Minister’s body.
(IANS)