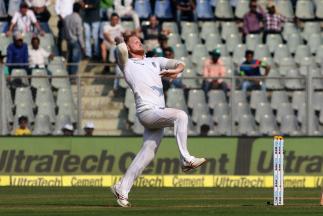 Birmingham: India were bowled out for 162 in their second innings, losing the first Test to England by 31 runs before lunch on the fourth day here on Saturday.

For England, medium-pacer Ben Stokes was lethal, taking the important wickets of Kohli and Hardik Pandya (31) on the day. The right-armer ended up with figures of 4/40 in the second innings for a match haul of six wickets.

England’s rookie bowling all-rounder Sam Curran was adjudged the Man of the Match. The 20-year-old picked up a total of five wickets. This included a four-wicket haul in the first innings when he destroyed the much hyped Indian top order.

The youngster was impressive with the bat as well. He emerged as the highest scorer in England’s second innings with a quick-fire 63 which propelled the hosts to a strong lead.

For the visitors, there was very little positives to take away from the series opener.

Just like the first innings, Kohli was the only saving grace for the visitors in the second innings as well. The Indian skipper scored a gritty 51 before being trapped lbw by Ben Stokes.

Apart from Kohli, star off-spinner Ravichandran Ashwin and pacers Ishant Sharma and Mohammed Shami were the only other Indians who managed leave a mark.

Ashwin troubled the England batsmen in both innings to emerge with a match haul of seven wickets. Ishant was impressive in the second innings with figures of 5-51 while Shami bagged three wickets during the hosts’ first essay.

Overall, the Indian bowlers turned in a satisfactory performance while most of the batsmen failed miserably.

Starting the day needing 84 runs to win, the visitors’ job was made even more difficult when Dinesh Karthik was caught in the slips after edging a delivery from James Anderson.

Hardik Pandya joined Kohli in the middle but the duo could could hold the England bowlers at bay for only around 10 overs before the latter fell victim to a misjudged shot.

As the Delhi batsman trudged back into the pavilion, India’s hopes of winning the Test seemed to vanish along with him.

An England victory was only a matter of time from then.

Stokes, who was understandably ecstatic after dismissing Kohli, claimed Mohammed Shami’s wicket later in that same over to plunge India into further trouble.

Ishant and Pandya were dismissed within a short span of each other as the hosts claimed a deserving victory.